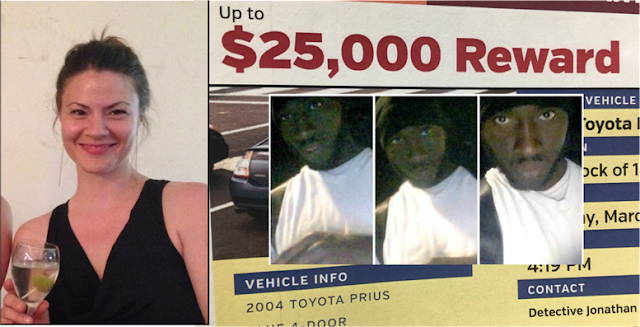 MARCH 25, 2017
Corrina Mehiel, a thirty-four-year-old white female, was found dead inside a basement apartment on the 600 block of 14th Street NE, Washington, DC. She had been tied up and stabbed to death. Her body was found on March 22nd. She had last been seen with friends on Sunday, March 19th. She was supposed to leave the DC Area the next morning.
Her 2004 blue Toyota Prius was stolen. It has Kentucky license plate number 722RMY. Police have released pictures of a black male that they believed was driving her stolen car when he stopped at convenience stores in Beltsville and Laurel, Maryland.
Mehiel is described as an artist and dedicated social justice activist. According to her friend Mel Chin, visiting professor at GW’s Corcoran School of Art and Design, “Corrina was a feminist she wanted to end to violence against women. She was committed to fairness and justice, and always fought for the rights of others. For example, she’d be the first to point out that victims of violence in D.C. are disproportionately people of color.”
Corrina Mehiel worked with Mel Chin at his art studio in Asheville, NC. She was in DC to help Chin set up an art exhibit. Mehiel was an instructor at the Art Academy of Cincinnati from 2014 to 2016. She taught a course on using art to affect social change. Her Facebook page largely consists of political posts.
http://narrative-collapse.com/2017/03/25/social-justice-activist-found-bound-and-stabbed-to-death-in-dc/
How much you want to bet she told him she was an anti-racist social justice warrior and he killed her anyway! Karma!
Posted by JE Aggas at 8:40 AM