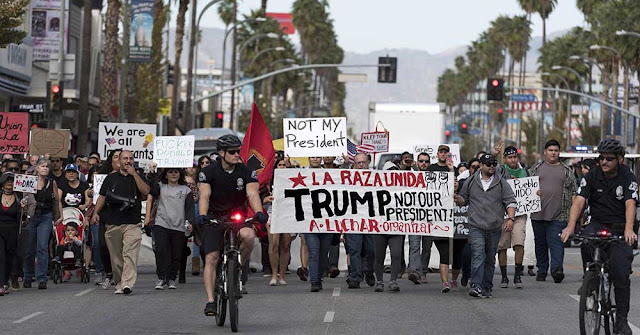 Democrats who are having trouble getting out of the first stage of grief — denial — aren't being helped by the fact that, now that all the votes are counted, Hillary Clinton's lead in the popular vote has topped 2.8 million, giving her a 48% share of the vote compared with Trumps 46%.

To those unschooled in how the United States selects presidents, this seems totally unfair. But look more closely at the numbers and you see that Clinton's advantage all but disappears.

As we noted in this space earlier, while Clinton's overall margin looks large and impressive, it is due to Clinton's huge margin of victory in one state — California — where she got a whopping 4.3 million more votes than Trump.

If you minus the illegal alien vote and the massive voter fraud that went on in California she flat out didn't win the popular vote. I hope in the next 4 years there's a huge effort to take back California, there's an easy way to do that too. Just translate all the pedophile devil worshiping news into Spanish and let the Catholic Mexicans read all about who they're voting for and Democrats are in big trouble. Mexicans don't like Devil worshiping pedophiles anymore than anyone else does!