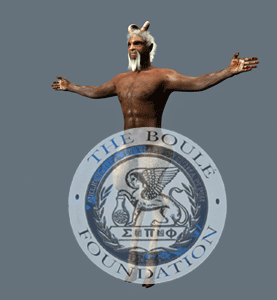 The Black Boule (Black Gay Illuminati)
“Anywhere there are prominent professional Blacks,
chances are they’re in the Boule set up to keep blacks from segregating and improving themselves”
In 1904, the first African -American Greek Secret Society was formed in Philadelphia, by Dr. Henry Minton and five of his colleagues. The Boule, (an acronym for Sigma Pi Phi) and pronounced “boo-lay”), was formed to bring together a select group of educated Black men and women. Fashioned after Yale’s Skull and Bones, the Boule historically takes pride in having provided leadership and service to Black Americans during the Great Depression, World Wars I and II, and the Civil Rights Movement.
What could the Boule offer America’s Blacks in the early 20th century? Joining the exclusive secret society offered advancement and perks to select Blacks in return for loyalty to its objectives. The upper tenth of Blacks started to live the good life as Boule members, while the majority of ordinary Blacks were disenfranchised. But what were the Boule’s objectives? The Boule recruits top Blacks in American Society into its ranks.
Today, 5000+ Archons, (male Boule members) and their wives, (Archousais), with 112 chapters, make up the wealthiest group of Black men and women on the planet. “Archon” means “demon” – the kind that like to keep hidden. But to who does the Boule really serve? The Satanic (mostly white) global elite! As long as the Black member conforms to the rules, the riches will be in abundance; if not, down comes the hatchet. Blackmail is part of the deal.
This Masonic secret society has a pyramid style like all the rest. The lower ranks are kept from knowing what the upper ranks are doing. The early 20th century was a period of reconstruction.
W.E.B. Dubois, founding member of the NYC chapter of the Boule said, “The Boule was created to keep the black professional away from Marcus Garvey”. The remaking of the House Negro was necessary to institute a group of Blacks who had a vested interest in protecting the Elite White System.(One thing that needs to be pointed out is the time period.
Shortly after the founding of the Boule’ was also a time Marcus Garvey’s “Back to Afrika” movement was reaching a million-plus people without television or radio.)
DuBois emphasized, as Cokely stated,
“the importance to steal the black professional away from Garvey because an Afrocentric organization that articulated and captured the black professional would give YT no safe haven in the black community, so the Boule’ — the remaking of the house negro was necessary to build a group of negroes who had an investment in protecting the white system as produced by whites having stolen this land…This is post reconstruction. Taking away the articulate negro, now desiring to replace them with organized institutions to keep them away from self improvement. So we find in the same period, as the founding of the Boule’, the founding of the 4 black male (Alpha Phi Alpha, Kappa Alpha Psi, Omega Psi Phi, and Phi Beta Sigma) and 4 black female (Alpha Kappa Alpha, Delta Sigma Theta, Zeta Phi Beta, and Sigma Gamma Rho) college-based fraternities and sororities.  We also find the founding of the NAACP and Urban League.
DuBois was one of the strongest opponents of Garvey and was an instrumental “tool” in stopping one of the strongest grassroots movements in this century. What was Garvey’s plan? His plan was to take as many Afrikans from the America’s and start a settlement in the nation of Liberia and then help their new nation produce and control their own rubber crops and other industries in natural resources.
Garvey said,
“If the oil of Africa is good for Rockefeller’s interest; if iron is good for Carnegie trust; then these minerals are good for us. Why should we allow wall street and the capitalist group of america and other countries exploit our country when they refuse to give us a fair chance in the countries of our adoption? Why should not Afrika give to the world its black Rockefeller, Rothschild, and Henry Ford?”
https://rastafari.tv/black-boule-rich-elite-homosexual-secret-society-paid-destroy-marcus-garvey/
Posted by JE Aggas at 7:16 PM