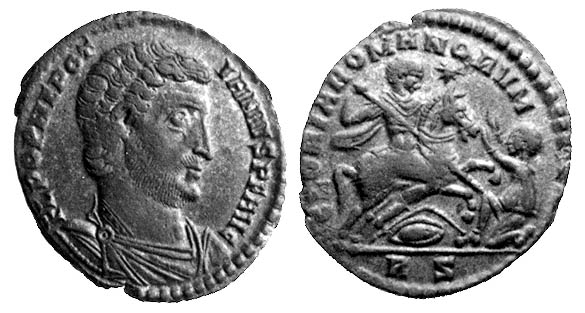 Julius Nepotianus (died June 30, 350), sometimes known in English as Nepotian, was a member of the Constantinian dynasty who reigned as a short-lived usurper of the Roman Empire. He ruled the city of Rome for twenty-eight days, before being killed by his rival usurper Magnentius' general Marcellinus.

After the revolt of Magnentius, Nepotianus proclaimed himself "emperor" and entered Rome with a band of gladiators on 3 June 350. After attempting to resist Nepotianus with an undisciplined force of Roman citizens, the defeated Praefectus urbi Titianus (or Anicius, or Anicetus), a supporter of Magnentius, fled the city.

Magnentius quickly dealt with this revolt by sending his trusted magister officiorum Marcellinus to Rome. According to Eutropius, Nepotianus was killed in the resulting struggle (on 30 June), his head put on a lance and borne around the city. In the following days, his mother Eutropia was also killed, during the persecution of the supporters of Nepotianus, most of whom were senators.