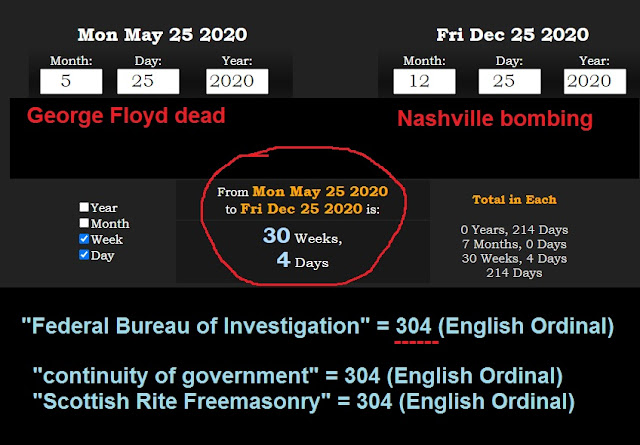 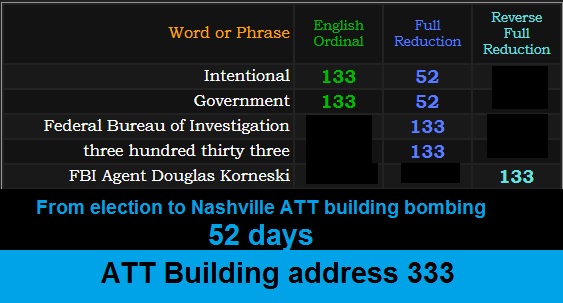 Police show up in Antioch TN looking for the RV owner 3 years, 3 months and 3 days after the Antioch Church shooting!
ATT Building address is 333 Commerce...
From and including: Sunday, September 24, 2017
To and including: Saturday, December 26, 2020
Result: 1190 days
Or 3 years, 3 months, 3 days including the end date.
Burnette Chapel shooting was a mass shooting that occurred on September 24, 2017 when a gunman opened fire at the Burnette Chapel Church of Christ in Antioch, Tennessee, part of the Greater Nashville Area, killing one person and injuring seven others.
The perpetrator was identified as Emanuel Kidega Samson, a 25-year-old native of Sudan. Samson was arrested after getting into an altercation with a bystander, and charged with first-degree murder and 43 other charges. The suspect indicated that the attack was an act of revenge for the 2015 Charleston church shooting.
https://abcnews.go.com/US/multiple-churchgoers-wounded-tennessee-shooting/story?id=50060133
The gunman, Emanuel Kidega Samson, was a 25-year-old Sudanese native residing legally in the United States, having arrived as a child in 1996. He was allegedly carrying two handguns, a 9mm and a .40-caliber, and was wearing a ski mask at the time of the attack.
Samson had been licensed to work as an unarmed security guard from 2014–16, although his license was expired and he had been seeking its reinstatement. Samson is a former member of the Burnette Chapel Church.
A review of Samson's Facebook page by the Southern Poverty Law Center (SPLC) found sympathies and interests to black supremacist figures and groups like the New Black Panther Party and the Nation of Islam, as well as an affinity for conspiracy theories. In the days leading up to the shooting, he posted "several cryptic messages" on his Facebook page.

Co-ordinates of the Black Church