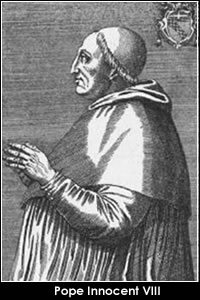 Pope Innocent the VIII wasn't so innocent. He's rumored to have had between 16 and 100 illegitmate children. A lot of them signed his tomb. One of those names was Christopher Columbus. Who's your daddy CC?

"The Admiral was chosen for his great work by our Lord who through his descent was from the blood royal of Jerusalem, yet was content to have his parentage from an obsure source."
Quote from: Ferdinand Columbus son of Christopher Columbus

The first Pope to encode Papal documents in secret ciphers..

Pope Innocent VIII the Pope of the Militant Orders

Giovanni Battista Cybo (or Cibo) was born in Genoa of Greek ancestry, the son of Arano Cybo or Cibo (c. 1375-c. 1455) and his wife Teodorina de Mari (c. 1380-), of an old Genoese family. His paternal grandparents were Maurizio Cybo and his wife Seracina Marocelli. Arano Cybo was a senator in Rome under Pope Calixtus III (1455–58).

A protracted conflict with King Ferdinand I of Naples the Conspiracy of the Barons,
King Ferdinand the First, also known as Ferrante..
The Conspiracy of the Barons was a revolution against Ferrante of Aragon, King of Naples by the Neapolitan aristocracy in 1485 and 1486..
The city Venice, enemy of the Aragon crown.
https://en.wikipedia.org/wiki/Conspiracy_of_the_Barons_(Naples)

After Innocent's VIII's death the Cybo family married into the d'Este family, which in turn leads to a winding trail to Hanover, the House of Orange and eventually to Victoria Welf Este otherwise known as Queen Victoria. Which means the descents of Christopher Columbus are related by blood to Queen Elizabeth!

Cybo's Coat of Arms included a matrix of black and whites squares.

A description of Innocent VIII call him, as already mentioned, as “naval pope”. Why? In some way he could also be described as the “American” pope. Columbus in the north of Italy means son of an unknown father, a foundling, son of the dove of the Holy Spirit, like the name Esposito in the south. Could father and son perhaps have gone to America together before 1492?
Columbus was always extremely reserved about his origins. He had a family coat of arms, something which in itself indicates that he wasn’t quite a “mister nobody”. The kings of Spain allow him to add it to the new arms, which are he is granted. The initial coat of arms of the Admiral depict a part whose colours refer to those of the Cybo family. Pope Borgia first describes Columbus as “dilecte fili”. “Nato facto”, predestined and programmed for “such a great enterprise”.
An atlas by Ptolemy, kept in the Academy of the Lincei in Rome, has a note that describes him as “Columbus nepos”. Equally in a coeval map at the library of Perugia. Nepos-nephew was the way courtly hypocrisy also called the children of pontiffs. At a time when many popes had children. Like Innocent VIII. A pope outside every norm, in a legacy that refers to the Orders of chivalry. Like those of the Holy Sepulchre and the Templars. Merged into the knights of Rhodes (today of Malta) and which had not given up the dream of a universal synarchy.
The pope came from the East, from Greece which for centuries had preserved knowledge, which now pours into Italy and contributes to the rising of the Renaissance. The pope had grown up among those knights of the sea who in Rome handed over to him as hostage, Djem, the son of Mohammed II, the conqueror of Constantinople. His brother Bajazet usurped the throne of Djem. The two are rivals to the point that both promise the pontiff the restitution of Jerusalem, of the holy places and of Constantinople, as long as he supports one of them.
alessandro viThe shrewd, in some ways Levantine, politics of Innocent VIII is a subtle game of chess, just as in his family coat of arms which, in the play of black and white, refers to the colours of the Templar “baussant”. Never as at that time was the papacy, which was the undisputed spiritual head of the Christian world, on the point of also assuming the temporal leadership of the completed globe. The aim was the peace and harmony that the Renaissance pursued. Starting with the harmony of the rediscovered sphere.
http://www.ruggeromarino-cristoforocolombo.com/colombo/67-it-s-time-to-rediscover-america.html