Rep. Lucille Roybal-Allard (D-Calif.) will likely be the chairwoman of the powerful House Appropriations Committee's Homeland Security Subcommittee, and will hold the purse strings on immigration-enforcement funding.
https://cis.org/Arthur/Trumps-Operation-Hold-Line-Border-Wall 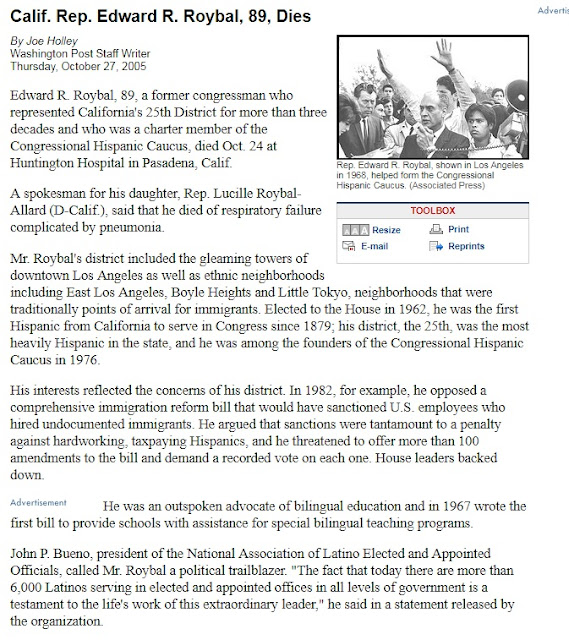 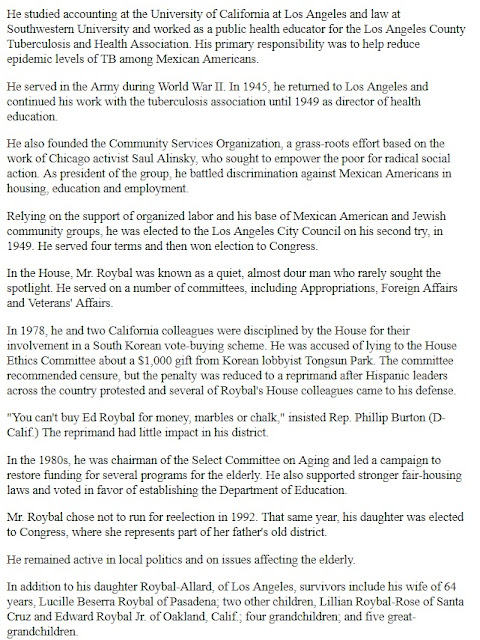 Edward R. Roybal, 89, a former congressman who represented California's 25th District for more than three decades and who was a charter member of the Congressional Hispanic Caucus, died Oct. 24 at Huntington Hospital in Pasadena, Calif.
A spokesman for his daughter, Rep. Lucille Roybal-Allard (D-Calif.), said that he died of respiratory failure complicated by pneumonia.
http://www.washingtonpost.com/wp-dyn/content/article/2005/10/26/AR2005102602439.html

Political campaigns
In 1992, she won the Democratic nomination for the newly created 33rd District. She won handily in November, and has been reelected ten times as of 2012. Her district was renumbered as the 34th after the 2000 Census and the 40th after the 2010 Census. 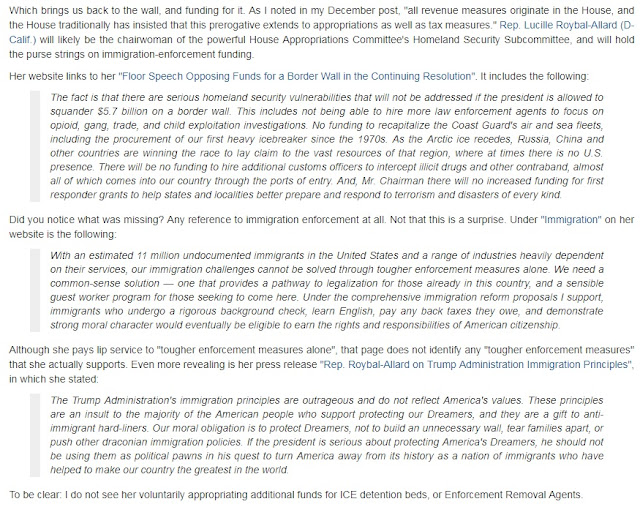 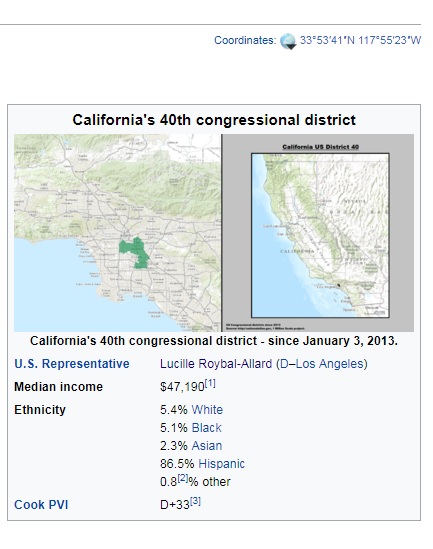 She grew up in Boyle Heights....

Throughout the 1920s and '30s, about forty percent of the population in Boyle Heights was Jewish. The core of the community was Brooklyn Avenue, since renamed Cesar E. Chavez Avenue, which hosted a string of Jewish-owned businesses, including the original Canter’s Deli.

Distinct from the upwardly mobile Jewish community that emerged in Hollywood and the Westside before World War II, Jews in Boyle Heights were primarily working-class families of Eastern European descent, largely secular, and politically engaged. A number of influential labor unions opened offices on Brooklyn Avenue, in close proximity to their members. Yiddish was widely spoken throughout the neighborhood.

Following the 1948 Supreme Court decision that declared restrictive covenants unconstitutional, more and more Jewish families began moving to the expanding suburbs in the western region of the city. Similarly, the newfound ease of obtaining home loans further propelled the Jewish out-migration, contributing to a major demographic shift in the Eastside. Those who remained in Boyle Heights deepened their connections with the rapidly growing Latinx community.

Growing up in Jewish Boyle Heights

Growing up in Boyle Heights, Shimona Yaroslavsky and her brother (now L.A. County Supervisor) Zev Yaroslavsky, were strongly influenced by the ardent progressive Zionism of their Russian immigrant parents.

Both father and mother were Hebrew teachers at the nearby City Terrace Folk Schule, sponsored by the Labor Zionist Organization, where students received a secular Jewish education in both Hebrew and Yiddish, Shimona writes.

The school was the center for Zionist activities, including meetings of the Habonim and Hashomer Hatzair youth groups, and, in one notable innovation for the time, held a communal bat mitzvah for 12-year-old girls in 1950.
https://jewishjournal.com/news/los_angeles/community/94128/

Ever since local activists protested the opening of Asher Cafe in Boyle Heights earlier this month for the gentrification it represents and the pro-Trump views of owner Asher Shalom, the restaurant has become a conservative darling. Shalom, an Israeli immigrant, has appeared on Fox News to cry victim, while other outlets have claimed with no proof whatsoever that protestors hurled anti-Semitic slurs and feces at Asher Cafe.

Some of the stories have noted that Boyle Heights used to be a heavily Jewish neighborhood before World War II. But what these reports never bother to disclose is how radical those Jews were — and how the many Jewish bakers back in the day were the most radical Jews of them all.

The full story is in the fascinating “Visions of a Jewish Future: The Jewish Bakers Union and Yiddish Culture in East Los Angeles, 1908-1942,” a 2013 dissertation by Caroline Luce, Research & Digital Projects Manager at the Alan D. Leve Center for Jewish Studies at UCLA.

A shorter version appears in the anthology Jews in the Los Angeles Mosaic, an anthology released in 2013 by the University of California Press. Both reveal a Boyle Heights that proves the in-your-face activism of anti-gentrification groups like Defend Boyle Heights isn’t a rude anomaly but rather fully in the spirit of their Jewish predecessors — and, in some way, less revolutionary.

Luce focuses on Jewish Bakers Union 453 of the Bakery and Confectionery Workers International Union. They got their charter in 1924, to split from Los Angeles’ main baker’s union, which was overwhelmingly white and Protestant at the time. But Jewish bakers had served Boyle Heights since at least the 1910s, when thousands of refugees from Czarist pogroms made their way to the Los Angeles neighborhood; 50,000 Jews lived there by the 1930s, a time when challah and rugelech were more common in the Eastside than tacos and burritos.

Established L.A. Jews thought their newcomer brethren were “undesirable”; Yiddish-speaking socialists thought the wealthier Jews were “highly assimilated super-capitalists,” per Luce. But the rabble would make Boyle Heights the center of Jewish life in Southern California for 50 years — specifically, the bakers.

Most of them knew how to speak and read English, Luce wrote, but “they shared a commitment to preserving Yiddish language and culture as the basis of a secular, diasporic form of Jewish peoplehood and to using Yiddish an engine of community mobilization.” The bakers quickly became “the most visible and tasty part of yidishe kultur in Boyle Heights.”