Then on Saturday night we get a Jewish stabbing....


The author of the book "The Shemitah" that shocked market watchers by letting us in the a secret in the Jewish calendar. That every seven years Jews sell their stocks on or by Elul 29 to obey an ancient Jewish agricultural law.

"The sabbath year (shmita Hebrew: שמיטה‬, literally "release") also called the sabbatical year or shǝvi'it (שביעית‬, literally "seventh") is the seventh year of the seven-year agricultural cycle mandated by the Torah for the Land of Israel, and still observed in contemporary Judaism.

During shmita, the land is left to lie fallow and all agricultural activity, including plowing, planting, pruning and harvesting, is forbidden by halakha (Jewish law). Other cultivation techniques (such as watering, fertilizing, weeding, spraying, trimming and mowing) may be performed as a preventive measure only, not to improve the growth of trees or other plants. Additionally, any fruits which grow of their own accord are deemed hefker (ownerless) and may be picked by anyone. A variety of laws also apply to the sale, consumption and disposal of shmita produce. All debts, except those of foreigners, were to be remitted."

He has a new book called "The Oracle" and it'a about those parashat Jews read on a weekly basis in the diaspora.

Last night December 28th 2019 when the stabbing of Jews in Monsey NY happened this is the parashat they were reading that day....

These are the verses....

On 12/28/19 they read Genesis 41:1 through 41:44 it's about Pharohs dream of the cows. Seven health cows and seven starving cows. The dream Joseph interpreted that a famine was coming.

Genesis 41 King James Version (KJV)
41 And it came to pass at the end of two full years, that Pharaoh dreamed: and, behold, he stood by the river.

2 And, behold, there came up out of the river seven well favoured kine and fatfleshed; and they fed in a meadow.

3 And, behold, seven other kine came up after them out of the river, ill favoured and leanfleshed; and stood by the other kine upon the brink of the river.

5 And he slept and dreamed the second time: and, behold, seven ears of corn came up upon one stalk, rank and good.

6 And, behold, seven thin ears and blasted with the east wind sprung up after them.

7 And the seven thin ears devoured the seven rank and full ears. And Pharaoh awoke, and, behold, it was a dream.

8 And it came to pass in the morning that his spirit was troubled; and he sent and called for all the magicians of Egypt, and all the wise men thereof: and Pharaoh told them his dream; but there was none that could interpret them unto Pharaoh.

9 Then spake the chief butler unto Pharaoh, saying, I do remember my faults this day:

10 Pharaoh was wroth with his servants, and put me in ward in the captain of the guard's house, both me and the chief baker:

11 And we dreamed a dream in one night, I and he; we dreamed each man according to the interpretation of his dream.

12 And there was there with us a young man, an Hebrew, servant to the captain of the guard; and we told him, and he interpreted to us our dreams; to each man according to his dream he did interpret.

13 And it came to pass, as he interpreted to us, so it was; me he restored unto mine office, and him he hanged.

14 Then Pharaoh sent and called Joseph, and they brought him hastily out of the dungeon: and he shaved himself, and changed his raiment, and came in unto Pharaoh.

15 And Pharaoh said unto Joseph, I have dreamed a dream, and there is none that can interpret it: and I have heard say of thee, that thou canst understand a dream to interpret it.

16 And Joseph answered Pharaoh, saying, It is not in me: God shall give Pharaoh an answer of peace.

17 And Pharaoh said unto Joseph, In my dream, behold, I stood upon the bank of the river:

18 And, behold, there came up out of the river seven kine, fatfleshed and well favoured; and they fed in a meadow:

19 And, behold, seven other kine came up after them, poor and very ill favoured and leanfleshed, such as I never saw in all the land of Egypt for badness:

20 And the lean and the ill favoured kine did eat up the first seven fat kine:

22 And I saw in my dream, and, behold, seven ears came up in one stalk, full and good:

23 And, behold, seven ears, withered, thin, and blasted with the east wind, sprung up after them:

24 And the thin ears devoured the seven good ears: and I told this unto the magicians; but there was none that could declare it to me.

25 And Joseph said unto Pharaoh, The dream of Pharaoh is one: God hath shewed Pharaoh what he is about to do.

28 This is the thing which I have spoken unto Pharaoh: What God is about to do he sheweth unto Pharaoh.

29 Behold, there come seven years of great plenty throughout all the land of Egypt:

30 And there shall arise after them seven years of famine; and all the plenty shall be forgotten in the land of Egypt; and the famine shall consume the land;

31 And the plenty shall not be known in the land by reason of that famine following; for it shall be very grievous.

32 And for that the dream was doubled unto Pharaoh twice; it is because the thing is established by God, and God will shortly bring it to pass.

33 Now therefore let Pharaoh look out a man discreet and wise, and set him over the land of Egypt.

34 Let Pharaoh do this, and let him appoint officers over the land, and take up the fifth part of the land of Egypt in the seven plenteous years.

35 And let them gather all the food of those good years that come, and lay up corn under the hand of Pharaoh, and let them keep food in the cities.

36 And that food shall be for store to the land against the seven years of famine, which shall be in the land of Egypt; that the land perish not through the famine.

38 And Pharaoh said unto his servants, Can we find such a one as this is, a man in whom the Spirit of God is?

39 And Pharaoh said unto Joseph, Forasmuch as God hath shewed thee all this, there is none so discreet and wise as thou art:

40 Thou shalt be over my house, and according unto thy word shall all my people be ruled: only in the throne will I be greater than thou.

41 And Pharaoh said unto Joseph, See, I have set thee over all the land of Egypt.

42 And Pharaoh took off his ring from his hand, and put it upon Joseph's hand, and arrayed him in vestures of fine linen, and put a gold chain about his neck;

43 And he made him to ride in the second chariot which he had; and they cried before him, Bow the knee: and he made him ruler over all the land of Egypt.

44 And Pharaoh said unto Joseph, I am Pharaoh, and without thee shall no man lift up his hand or foot in all the land of Egypt.

How many days has it been since the Pittsburgh shooting? 427 days.... 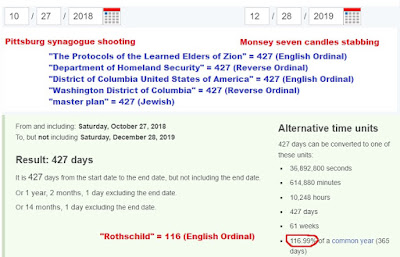 The dream about the seven starving cows that's what they read on Chanukah: 7 Candles 12/28/19

I believe this was a signal for all the insiders around the world to sell their stocks now.

And the name of the town it happened in?

If you take out the S you get MONEY!

Donald Trump's lawyer who's name was Cohen sacrificed him. What does a Cohen do they sacrifice animals at the temple like red heifers.