Pope's 33rd trip is to Iraq ancient Babylon ... 3/5
Pope's visit to Iraq on 3/5 is his 33rd trip. He is visiting a pyramid-style Ziggurat like the kind Nimrod built that made God split the races apart and scramble their languages. God clearly didn't like the idea of a one world government but this Pope does! His 33rd visit is to the place where central state power began. Maybe while he's there he can bring back Baal worship and we can all throw our  babies into the fire. Pope Francis is a Devil worshiper with an agenda! A new world order agenda. Working hand and hand with the UN, demonic bankers and leftists to take all freedom from the human race.
Pope Francis decode
Pope Francis' numbers. He's the 266 Pope...He was inaugurated on 3/13/13 that date in prime numbers is 2/6/6 ..He visited the US on 9/23 the 266th day of the year. He stepped off the plane at exactly 404 PM representing the 404 verses in Revelation and his name in Jewish gematria...
"Pope Francis" = 404 (Jewish) 404 verses in revelations
In the same cipher 266 represents
"Man Of Sin" = 266 (Jewish)
"Godless" = 266 (Jewish)
"false light" = 266 (Jewish)
MAN OF SIN = 266
Pope Francis IS the man of sin.... He's number 266 in Strong's means "sin"
STRONGS 266
Strong's 266 means sin...
The KJV translates Strong's G266 in the following manner: sin , sinful , offense 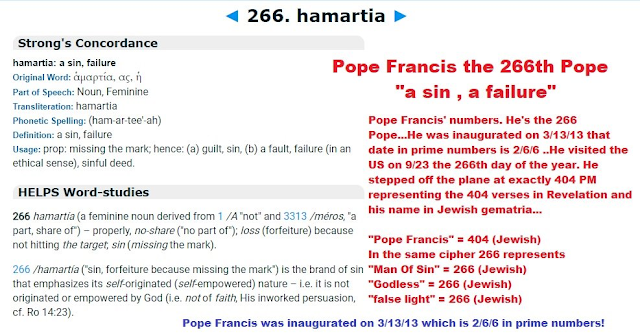