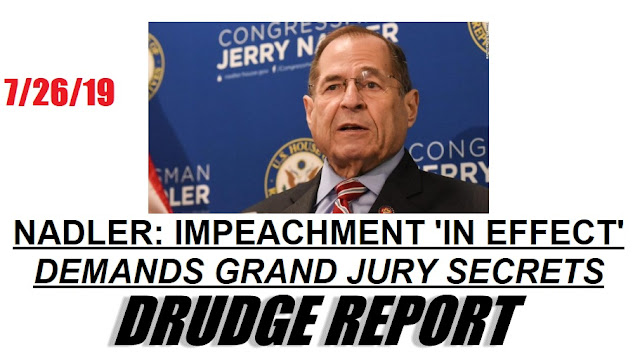 “No, I’m not trying to run out the clock,” the speaker said at her final weekly press conference before departing Washington for the House’s six-week summer recess.

WASHINGTON — House Speaker Nancy Pelosi, D-Calif., said Friday that a decision on whether the House pursues the impeachment of President Donald Trump will be made in a “timely fashion” and denied the idea that she is trying to “run out the clock” on the issue.

Her comments came shortly before House Judiciary Committee Chairman Jerry Nadler, D-N.Y., said at a separate press conference that his panel has already "in effect" been conducting an impeachment inquiry of the president — and said in a court filing that “articles of impeachment are under consideration as part of the Committee’s investigation, although no final determination has been made."

Democrats are seeking to enforce subpoenas in court for certain documents in their investigation, as well as testimony from witnesses, all of which the administration has not complied with. This includes requests for six years of the president's tax returns.

“Everybody has the liberty and the luxury to espouse their own position and to criticize me for trying to go down the path in the most determined, positive way,” she said. “Again, their advocacy for impeachment only gives me leverage.”