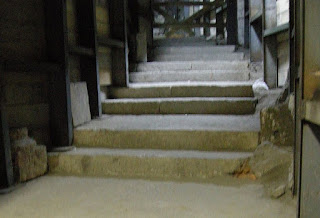 Israel opens and ancient road leading to the old temple place.
US/Israel ambassador's birthday 8/8
From and including: Sunday, June 30, 2019
To and including: Thursday, August 8, 2019
Result: 40 days
"David" = 40 (English Ordinal)

From Yoav Dothan's photo of the road ascending toward the Temple Mount, on the ancient Jerusalem pilgrim road that was used by pilgrims ascending from the Pool of Siloam to the Temple Mount via the Hulda Gates in the Southern Wall. (Wikipedia)

This afternoon, Sunday, June 30, 2019, US Ambassador Friedman, White House Special Representative for International Negotiations Jason Greenblatt together with an array of Israeli ministers and members of Knesset will make history in Jerusalem, when they unveil the Pilgrimage Road, a fundamental piece of the city’s past, with historical, cultural and religious significance to billions.

Deep beneath a potato field, outside the 500-year-old city walls, Captain Charles Warren had discovered a hidden passage to Jerusalem’s biblical water source, the Gihon Spring. He would also find archaeological remains that predated those found inside the walls by thousands of years, leading him to opine that the original City of Jerusalem, known in the Bible as the City of David, was just south of what is known until today as the Old City.

Tens of international archaeological expeditions have proven him right, 152 years later, with some of the most significant finds of the ancient world, including what is thought to be King David’s Palace and seals bearing the Hebrew names of many biblical figures from the House of David.

But perhaps the most poignant of artifacts discovered were those bearing a message to mankind. Hundreds of coins with very little monetary value were unearthed bearing the Hebrew words “For the Freedom of Zion,” minted by the last surviving Jews of Jerusalem as the city burnt around them, perhaps as a message to future generations that although Jerusalem had been lost, it would not be lost forever 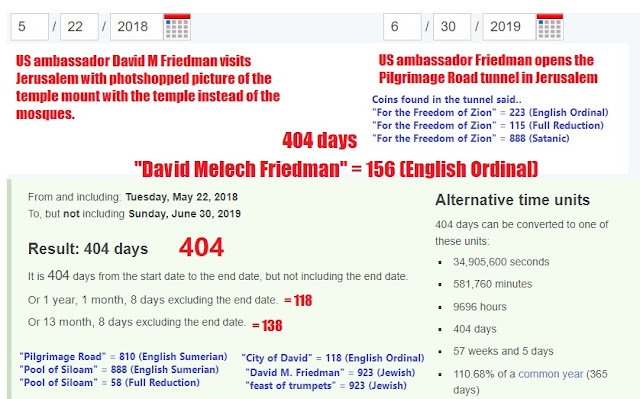 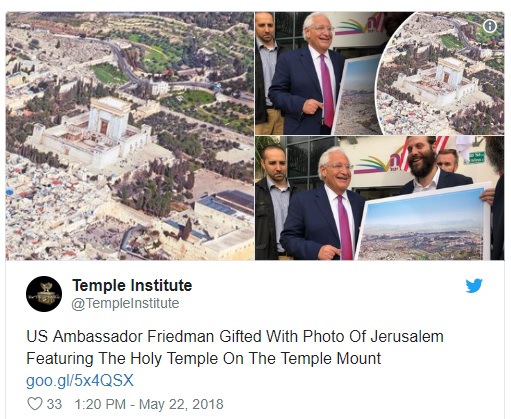 And check this out. From the photoshopped picture date to the Ambassadors birthday is 444 days.
From and including: Tuesday, May 22, 2018
To and including: Thursday, August 8, 2019
Result: 444 days