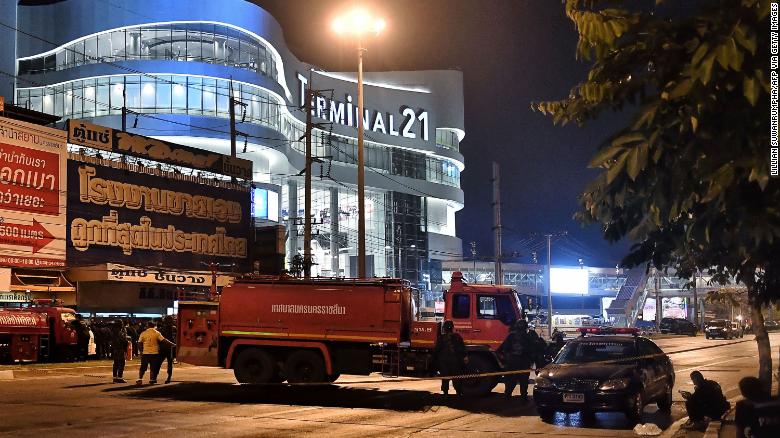 I don't have time to post this morning but real quick - this seems to have to do with the numerology of King Vajiralongkorn, who is 24,666 days old
This is his 1214th day as king - 1214 the shooting code from Sandy Hook, Marjory Stoneman Douglas, etc.
It's also 280 days after his coronation, and today is 2/8
"Thailand" = "False flag" = "Nakhon Ratchasima"

A Thai soldier has killed at least 20 people in a shooting spree, authorities say. He may be at a mall
By Kocha Olarn and Rory Sullivan, CNN
Updated 5:34 PM ET, Sat February 8, 2020

Thai soldiers and paramedics gather outside the Terminal 21 shopping mall where dozens of terrified shoppers were evacuated amid a manhunt for a mass shooting suspect.
Police and someone believed to be the suspected gunman could be heard yelling at one another amid bursts of gunfire on video posted to social media. CNN could not independently confirm the authenticity of this video.
The manhunt was still underway about 5 a.m. local time Sunday, Col. Krittaya Laoprasobwattana, chief of Muang Nakhon Ratchasima police station, told CNN -- about eight hours after the incident began.
News footage from the scene showed people leaving the area in pickup trucks and cars as security forces surrounded the mall.

The shooting happened in Nakhon Ratchasima Province, known as Korat.

Jon Fielding, an English teacher who lives in the area, told CNN that he was in the mall with a friend when people started running and shouting in panic.
"Everybody was running into the shops and restaurants and barricading the doors," he said, adding that word spread of a mass shooting. "Everyone was really panicking. Everyone was looking through the glass trying to see what was happening exactly."
Fielding said he was with a group of about 20 people who sought shelter in a dark kitchen in the back of a restaurant for five hours. He said the mall was packed and hundreds of people were trapped for hours before being evacuated.

"It's a huge mall, really busy," he said. "There must have been thousands of people in the mall."
"Please be calm, find a safe place to hide and mute your mobile phones," the nation's Crime Suppression Division, part of the Thai police, tweeted to those stuck inside the mall, advising them to send their locations, the number of people with them and contact numbers to the police.
"A combined force of police and military has started their operation to evacuate people who have been stuck inside the building," defense ministry spokesman Lt. Gen. Kongcheep Tantravanich said in a statement, adding that officers were doing their best to control the situation.

Thailand security forces take cover behind an ambulance as they chase a shooter thought to be hiding in a shopping mall after a mass shooting in Thailand.
Thailand's main telecommunications body reportedly has urged Thai broadcasters not to broadcast live footage from near the mall to avoid hindering security efforts.
The gunman's motive wasn't immediately known, Pattanacharoen said.

The suspect, Army Sub. Lt. Jakrapanth Thomma, is an ammunition battalion officer working for the 22nd Ammunition Battalion, defense ministry spokesman Lt. Gen. Kongcheep Tantravanich said.
"In general, any military (officer) would be good at guns, but this man certainly has more skills," he said. 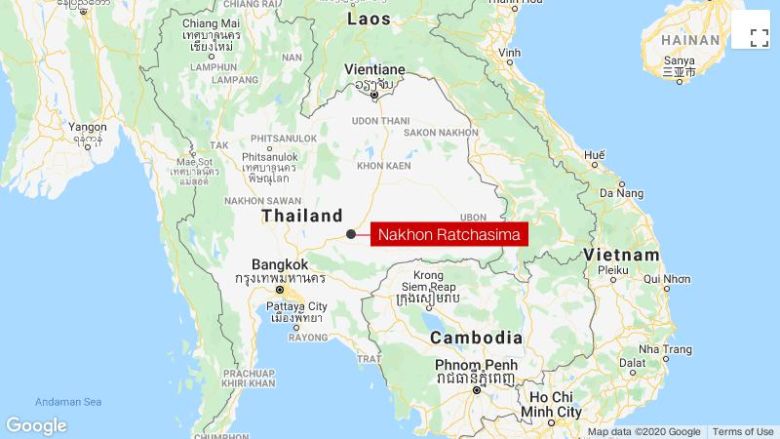 The gunman quarreled with his superior and ended up shooting and killing him, Kongcheep said. He then took the superior's gun and went around shooting his colleagues. Aside from the superior, it wasn't immediately known whether any military personnel were killed.

The soldier also stole guns, including at least one machine gun, and a military Humvee from his quarter. Tantravanich could not confirm the number of guns and ammunition taken.
After the shooter escaped from his quarter, he drove to the shopping mall and shot civilians along the way, Tantravanich said.

Police posted an image of the suspect, saying: "If anybody has any information please contact the crime suppression unit. Warning, a person in this picture has committed a shooting at Nakhon Ratchasima. It resulted in many injuries. At the moment this culprit is in the area of Terminal 21 Korat shopping mall."

The bodies of the 20 people killed were at Maharat Nakhon Ratchasima Hospital, Deputy Prime Minister Anutin Charnvirakul said on Thai Public Broadcasting Service.
Prime Minister Prayut Chan-o-cha earlier sent his condolences to the families of those killed or injured in the attack via a post on his official Twitter page. 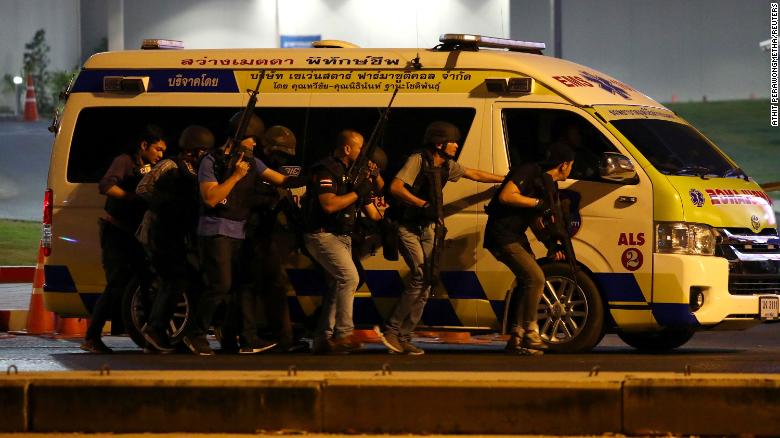 President Obama meets His Majesty during his visit to Bangkok in 2012
Oct 31, 2016 length of video 2:21
U.S. Embassy Bangkok
https://www.youtube.com/watch?time_continue=56&v=doiVZThCX38&feature=emb_logo

A Look Back at President Obama’s visit to Thailand

But more than a day after he was shot dead following a near 17-hour shooting spree that killed 29 people and left dozens more wounded, the killer – Jakrapanth Thomma – remains something of an enigma.