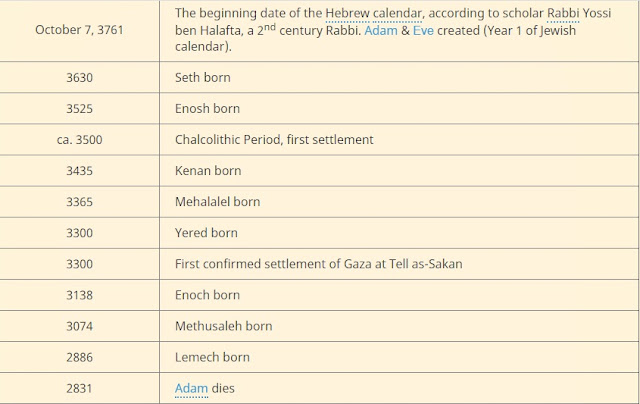 It is generally accepted that the sage Rabbi Yose ben Halafta is one who made the calculation. He was a tanna, a sage of the Mishnaic period, who lived in Sepphoris, a town in the Galilee, in the 2nd century C.E.

Yose ben Halafta was one of the principal students of Rabbi Akiva, the most revered rabbinical figure of his time. Rabbi Yose was in turn the teacher of Rabbi Yehuda Hanasi, who would become the chief editor of the Mishnah, one of whose most frequently cited rabbis is Ben Halafta. He is commonly accepted as the author of the book Seder Olam (“Order of the World,” sometimes called Seder Olam Rabba, the “Great Order of the World,” to distinguish it from a later work with the same name), a history that attempts to give dates to all of the people and events mentioned in the Hebrew Bible, and up to Rabbi Yose’s time, which coincided with the Bar-Kochba Revolt of 132 C.E.

According to Rabbi Yose’s understanding of the Book of Genesis, the process of Creation began on Elul 25 of Year 1. The sixth day, when Adam and Eve were created, was on the first day of Tishrei - which is when the Jewish New Year, Rosh Hashana, is celebrated – of  Year 2.

Since the Hebrew system of dating purports to begin at the Beginning, this system follows the number of a Hebrew year with Hebrew phrase “lebri’at ha’olam” – Hebrew for, “since the world’s creation.” By R. Yose’s method, the creation of man took place in 3760 B.C.E.

It was left to Maimonides, the 12th-century Jewish philosopher and scientist, to set the precise parameters of this system.

In his Mishneh Torah, Maimonides wrote that all calculations of dates should be based on "the third day of Nisan in this present year ... which is the year 4938 of the creation of the world" – which correlated to March 22, 1178, C.E.  It is his system that continues to be in use today, not only for calculating the Hebrew year, but also for coordinating it with the lunar cycle that determines the months.

According to Maimonides’ calculations, the beginning of creation was in Hebrew Year 0 (referred to as “Anno Mundi 0” in Latin), and the creation of humans was in Anno Mundi Hebrew Year, or Anno Mundi 1, which corresponds to 3761 B.C.E.

That's so weird that the Greek letter lambda would represent the wavelength of light and the Hebrew letter Lamedh represents Libra or Tishrei the month of the creation on October 7th 3761. Let there be light...
"velocity" = 666 (English Sumerian)
"lambda" = 33 (English Ordinal)