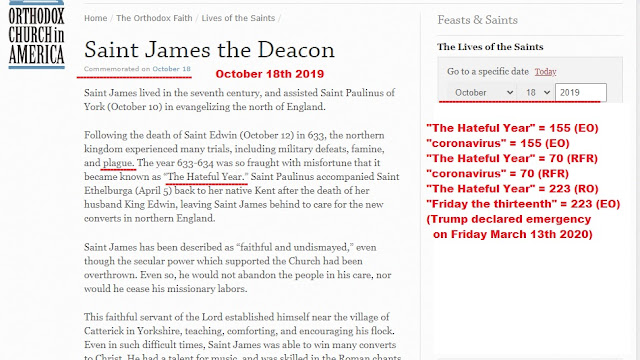 "The Hateful Year" = 155 (English Ordinal)
"coronavirus" = 155 (English Ordinal)
"The Hateful Year" = 70 (Reverse Full Reduction)
"coronavirus" = 70 (Reverse Full Reduction)
"The Hateful Year" = 223 (Reverse Ordinal)
"Friday the thirteenth" = 223 (English Ordinal)
(Trump declared emergency on Friday March 13th 2020)
"Saint James" = 666 (English Sumerian)
"vaccination" = 666 (English Sumerian)
"mark of beast" = 666 (English Sumerian)
"second wave" = 666 (English Sumerian)
Trump's birth to lunar eclipse (halfway point in twin eclipses)
From 6/14/1946 to 12/14/2020 is 966 sidereal lunar months
"Saint James" = 966 (Jewish)
From and including: Friday, June 14, 1946
To and including: Monday, December 14, 2020
Result: 27,213 days
27213/27.322 = 996.010540956
"Saint James" = 966 (Jewish)
Saint James the Deacon
Commemorated on October 18
Saint James lived in the seventh century, and assisted Saint Paulinus of York (October 10) in evangelizing the north of England.
Following the death of Saint Edwin (October 12) in 633, the northern kingdom experienced many trials, including military defeats, famine, and plague. The year 633-634 was so fraught with misfortune that it became known as “The Hateful Year.” Saint Paulinus accompanied Saint Ethelburga (April 5) back to her native Kent after the death of her husband King Edwin, leaving Saint James behind to care for the new converts in northern England.
Saint James has been described as “faithful and undismayed,” even though the secular power which supported the Church had been overthrown. Even so, he would not abandon the people in his care, nor would he cease his missionary labors.
This faithful servant of the Lord established himself near the village of Catterick in Yorkshire, teaching, comforting, and encouraging his flock. Even in such difficult times, Saint James was able to win many converts to Christ. He had a talent for music, and was skilled in the Roman chants composed by Saint Gregory Dialogus (March 12) which were being used in Kent. James taught these chants to the Christians of the north. When peace returned and the churches reopened, their services were beautified with the chants which Saint James had given them.
We do not know exactly when Saint James died, but it is believed that he survived for at least thirty years after “The Hateful Year,” and participated in the Synod of Whitby in 664.
Saint James does not appear to have been ordained to the holy priesthood, but through his tireless labors he built up the Church in the north. Saint Bede (May 27) calls him “a man of great energy and repute in Christ’s Church” (HISTORY OF THE ENGLISH CHURCH AND PEOPLE, Book II, chapter 16).
"Saint James The Deacon" = 186 (English Ordinal) the 186th prime number is 1109 or 11/09 the day Trump was declared the winner of the 2016 election.
"St James The Deacon" = 54 (Full Reduction)
https://www.oca.org/saints/lives/2019/10/18/108025-saint-james-the-deacon
Saint James lived in the seventh century, and assisted Saint Paulinus of York (October 10) in evangelizing the north of England. 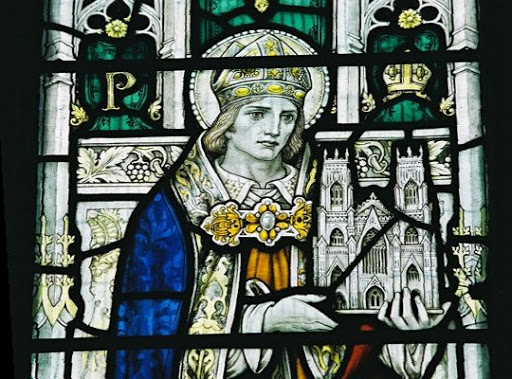 StP – St Paulinus – Feastday 10 October
Paulinus, was a member of the second company of missionary monks sent by Pope Gregory to England from Rome in 601 to assist Saint Augustine of Canterbury and his companions. For many years Paulinus stayed in the region around Kent but when the Kentish princess Ethelburga came north to Northumbria to marry the pagan king, Edwin, Paulinus was consecrated bishop and came north with her as her chaplain.
http://stmargaretclitherowyork.org.uk/st-paulinus-feastday-10-october/
Posted by JE Aggas at 9:07 PM