Watch for the moon and the Twins #Halloween #144 #moon #Castor 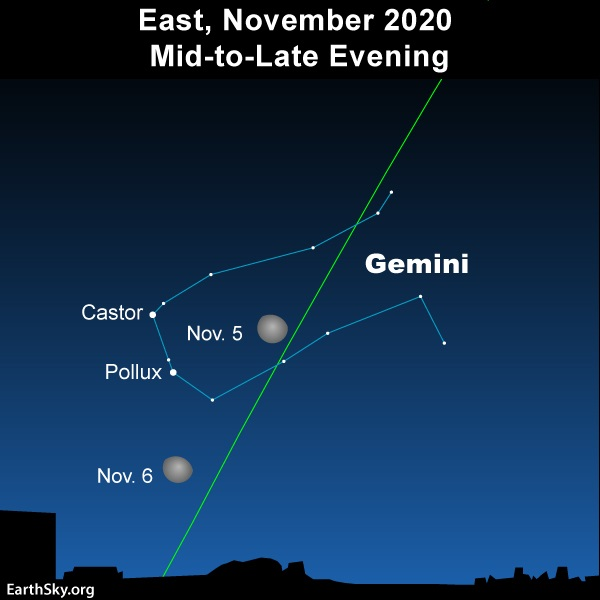 On November 5 and 6, 2020, before going to bed look for the moon in your eastern sky. It’ll be a bright waning gibbous moon, and you might notice two bright stars in its vicinity. These stars are noticeable for being both bright and close together on the sky’s dome, and that is why – in legends of the sky – they often represent Twins.
The stars are Castor and Pollux in the constellation Gemini.
From mid-northern latitudes, they appear over your eastern horizon with the moon by around 9 p.m. on November 6. The next day – on November 6 – Castor and Pollux will rise about 4 minutes earlier whereas the moon will come up about one hour later. From the Southern Hemisphere, they all ascend in the east a bit later in the evening. If you’re not one for staying up late, you can always get up before dawn to view the moon and Gemini stars in the morning sky. Then they’ll be in the west! 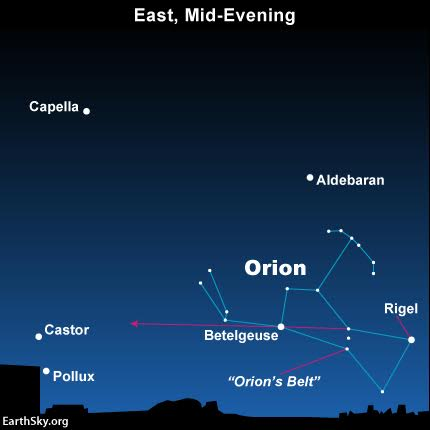 Sky chart of the constellation Gemini via IAU. When the moon is no longer in front of Gemini, draw an imaginary line from the westernmost star of Orion’s Belt and through the bright ruddy star Betelgeuse to locate the Gemini stars, Castor and Pollux.
The constellation Orion is also fairly close to the moon on November 15, and the Giant Hunter might dazzle you with his many bright stars. You’ll always know you’re seeing Orion if you notice its Belt stars: three medium-bright stars in a short, straight row.
Several days from now, when the moon drops out of the constellation Gemini, you can always star-hop to Castor and Pollux from Orion. Simply draw an imaginary line from Orion’s Belt through the bright star Betelgeuse to find the Gemini stars Castor and Pollux. This way of finding Gemini’s two brightest stars works in both the Northern and Southern Hemispheres.
At mid-northern latitudes – like those in the mainland United States – the constellations Gemini and Orion rise at approximately the same time. However, at more northerly latitudes – like those in Alaska – Gemini rises before Orion. That far north, the Big Dipper is visible at early evening, so you can use the Big Dipper bowl to star-hop to Castor and Pollux.
At more southerly latitudes, as in the northern tropics and the Southern Hemisphere, Orion rises before Gemini.
The starry sky is one great big connect-the-dots book. Learn how to star-hop with certain key stars, and you can more easily orient yourself to the night sky when traveling to faraway latitudes.
By the way, the star Castor in the constellation Gemini very closely marks the radiant point for the Geminid meteor shower, which peaks every year around December 13 or 14.
Bottom line: The waning gibbous moon offers some guidance on the nights of November 5 and 6, as it shines in the vicinity of the Gemini stars Castor and Pollux.
https://earthsky.org/tonight/moon-in-gemini-near-castor-and-pollux
Floyd time of death and castor the kneeling constellation
https://decodingsatan.blogspot.com/2020/06/floyd-time-of-time-and-castor-kneeling.html
Posted by JE Aggas at 7:24 PM