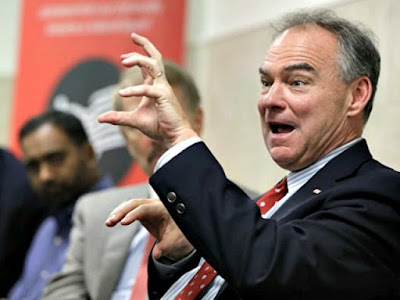 On July 22 Hillary Clinton announced Tim Kaine as her running mate. Kaine is a Democrat Senator from Virginia who supports a ban on 15-round “clips” and “assault weapons,” and who wants to enact a law to hold gun dealers liable for the misuse of firearms.

During the June 26 airing of Meet the Press, Kaine told Chuck Todd that he voted for an “assault weapons” ban before and “would likely vote for it again.” But he stressed that he believes “limitations on the size of magazines and ammunition clips” is the first step to take.

Todd asked Kaine if he believes the sale of AR-15 rifles ought to be illegal, and Kaine offered no direct answer, Instead, he suggested the problem with banning certain rifles is that the ban can be circumvented. Kaine said:

Here’s the thing, I have voted for [the assault weapons ban], and I would likely vote for it again, but here’s the practical problem I think you’re aware of. As soon as you define what an assault weapon is–that you can’t sell a weapon and here’s how to describe it–gun manufacturers just make one adjustment or two and they say, “See, this isn’t subject to the limitation.”