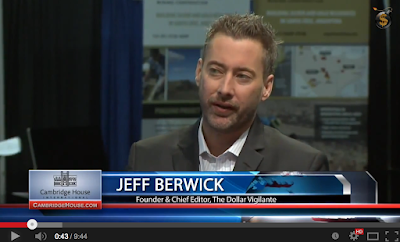 This week on THC, Greg chats with The Dollar Vigilante himself, and host of the Anarchast, Jeff Berwick. Jeff was fortunate enough to capitalize at the peak of the tech bubble freeing him up to travel to over 100 countries in 5 years. He is the embodiment of a true world citizen, and as a result has become one of the biggest proponents of the Permanent Traveler/Prior Tax Payer Theory.

After a 3 year hiatus from THC, the anarcho-capitalist and staunch opponent to the soul sucking institutions of the established states and central banks, returns to discuss mankind's best options for a revolution and what lays ahead on the horizon. Join them as they explore bold and creative solutions to keep us afloat in our uncertain future.

On today's episode they begin by recapping the most recent madness:

2:00 Many of us see the signs that we are on the verge of chaos in more ways than one, with tensions that are high in America, a polarizing upcoming election cycle and a war with police becoming the new normal, the house of cards that is the globalist economy seems to be on shakier ground than ever. Listen as Greg and Jeff examine how things are speeding up even more now than ever, and maybe it's because we are inching closer and closer to the collapse.

6:40 With the proverbial gun loaded with bullets such as lower wages, crippling healthcare debt, a broken college loan system and out of control income taxes, they take a closer look at how to re-position yourself out of the cross hairs and into the international stage. They discuss creative options for escaping government control and regaining sovereignty through employing techniques such as the permanent traveler (PT) theory created by Harry Schultz or even simply using tactics that can help everyday Americans un-shoulder the outrageous, ever increasing extortion of tax burdens.

26:20 Having just sustained a huge bubble crash, Jeff was acutely aware of what was looming above in the financial stratosphere. On the will of central banks and led by Alan Greenspan wielding the fear of Y2K, the Federal Reserve ballooned the money supply and proceeded to set the stage for a dangerous financial future. This scam, which was orchestrated to impoverish everyone except those who control the central banks, allowed for the birth of The Dollar Vigilante.

31:00 As his research continued to expand, Jeff stumbled upon The Harbinger by Johnathan Cahn. In his book, Cahn describes a seven year cycle dating back to both the Torah and Bible, known as theShemitah cycle. Jeff has applied his knowledge of the Shemitah to the chaotic financial cycles and found that these cycles correlate with the most recent market collapses. In light of this information and given recent market volatility, Jeff has predictions about upcoming major market changes.

37:00 Every seven Shemitah cycles is a "super" Shemitah, otherwise known as a Jubilee year. Listen as Greg and Jeff explore what the Jubilee cycle this year may have in store. Using dates contrived using the Hebrew calendar, the Jubilee was determined to have started in September of last year and concludes early October this year. Follow along as they reflect on the impact of the Jubilee with movements such as the recent Brexit referendum, to the first of the year market crash, the Pope's premature declaration of a Jubilee year and the IMF's introduction of China's currency into the SDR currency basket.

50:00 Greg and Jeff debate the integrity of the Brexit vote, and the affects that escaping from the clutches of EU control will have going forward. Listen as they analyze the possible focus of the most recent Bilderberg conference in Europe, which could have included various topics such as the epic market meltdowns following the vote and the ushering in of a New World Order.

57:30 Fresh off the heels of the recent police slayings in Dallas, Jeff and Greg discuss how we've wound up in such a clusterfuck. The centrally planned, communist based organization of the police are failing to uphold their duty to protect and serve, while becoming a military replacement roaming the streets outfitted with tanks, riot gear, tear gas, and bullets.

From Brexit to Jubilee

- China’s Central Bank announced on April 7 that the regulator starts to release foreign reserves data denominated in both the US Dollar and Special Drawing Rights (SDR) this month. The regulator said that the SDR, a basket of currencies, tends to be more stable than individual currencies and thus it helps to reduce valuation changes caused by large fluctuations in specific major currencies. With this modification, foreign reserve figures can be more objective and this can also improve the role of SDR as a unit of account.

Though PBOC did not mention it, introducing a SDR-denominated data will help to improve the Chinese Yuan’s role as well, as the currency has been approved to be included in the SDR basket last November. On October 1, 2016, Yuan will officially join the basket.