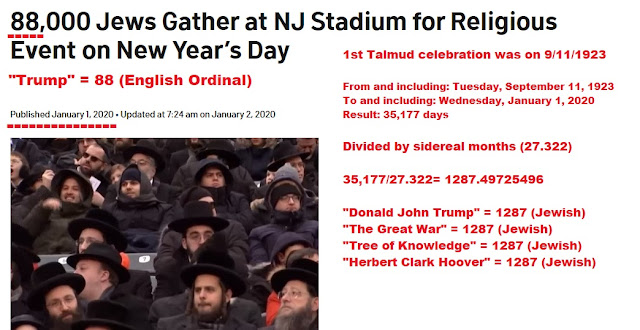 VIDEO BY MANY FISH

Forgive my grumpy tude, pretty drained. But! Interesting timing with the strike on Iran interests huh! And the anti-s3mitism “thing”. Just as this 111,000 GIANT “gathering” is going on at the Metatron Tree of Life Stadium? This is much bigger than most realize, world wide spiritual war manifest! This massive “Kabbalah gathering ritual” was to open pathways/portals and conjure power, period! The “Great Old Ones” are awakened. Look for things to seriously heat up soon! Let no man deceive you! Be strong in the Lord Christ Jesus! May God bless and keep you all!

Solar eclipse of September 10, 1923. A total solar eclipse occurred on Monday, September 10, 1923. A solar eclipse occurs when the Moon passes between Earth and the Sun, thereby totally or partly obscuring the image of the Sun for a viewer on Earth. Greatest eclipse: 20:47:29 Gamma: 0.5149 Magnitude: 1.043 The path of totality started at the southeastern tip of Shiashkotan in Japan (now in Russia) on September 11, and crossed the Pacific Ocean, southwestern California including the whole Channel Islands, northwestern and northern Mexico, Yucatan Peninsula, British Honduras (today's Belize), Swan Islands, Honduras, and Serranilla Bank and Bajo Nuevo in Colombia on September 10. The eclipse was over 90% in Los Angeles, San Diego and Santa Barbara in the Southern California coast.