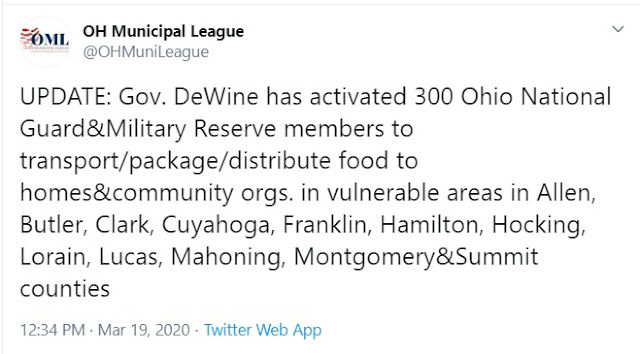 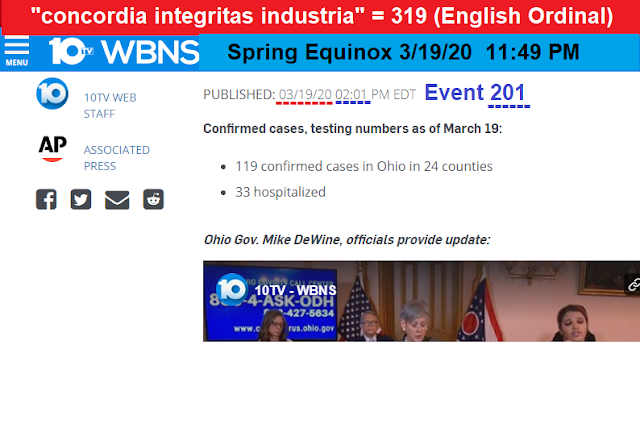 From Dewines birthday to calling out National Guard...

Yellow Springs is a village in Greene County, Ohio, United States. The population was 3,487 at the 2010 census. It is part of the Dayton Metropolitan Statistical Area. It is home of Antioch College and Antioch University Midwest.

History
In 1825, the village was founded by William Mills and approximately 100 families, followers of Robert Owen, who wanted to emulate the utopian community at New Harmony, Indiana. The communitarian efforts dissolved due to internal conflicts.

The village was named after a nearby natural spring with waters high in iron content. It had long been visited by the Shawnee Native Americans who occupied the area well before European-American settlement here.

The completion of the Little Miami Railroad in 1846 brought increased commerce, inhabitants, and tourism to this area of Greene County. Many regular visitors of the nineteenth century came for the springs, as these were believed to have medicinal benefits. The village of Yellow Springs was incorporated in 1856.[4]

The resort known as Tawawa Springs, which had a hotel and cabins for families, was developed near the springs, named after a Shawnee word for the color of the water. Among the summer visitors were Southern planters and their mistresses of color, most of whom were enslaved, and their mixed-race "natural", or illegitimate children. A few of the mistresses were free women of color. Such visitors scandalized the Northerners in Ohio. The resort went out of business in the 1850s. The Cincinnati Methodist Episcopal Church and African Methodist Episcopal Church (AME) collaborated on a project to purchase the facility and use it to found a new college for African-American students in 1856. Purchased by the AME Church in the early 1860s and operated by African Americans since then, it has developed as Wilberforce University, in a village known as Wilberforce.

Antioch College was founded in 1850 by the Christian Connection, and began operating in 1853 with the distinguished scholar Horace Mann as its first president. In 1920, Arthur E. Morgan became president of Antioch College; he was known for his innovations and implemented a much-imitated work-study program for students. An engineer by training, Morgan left Antioch to become head of the Tennessee Valley Authority during President Franklin D. Roosevelt's administration. Upon his return to Yellow Springs, Morgan was a key leader of Quaker intentional community developments in Ohio and North Carolina.

Antioch College expanded beginning in 1964, to include 38 "centers" around the country by the end of 1979. Its by-laws were changed to define Antioch as a "network", not a college, owned by Antioch University Corporation. In 1986, 32 of its units around the country were closed, leaving six campuses, which included both its original College campus in Yellow Springs and the college's School of Adult and Experiential Learning there. It operated separately as Antioch University McGregor. That adult and graduate education school was renamed as Antioch University Midwest in 1988.

The Conway Colony, a group of 30 freed slaves who were transported by Moncure D. Conway, the abolitionist son of their former owner, were settled in this village in 1862.[6]

Wheeling Gaunt, a former slave who had purchased his own freedom, came to Yellow Springs in the 1860s. By his death in 1894, he owned a substantial amount of land. Gaunt bequeathed to the village a large piece of land on its western side, requesting that the rent be used to buy flour for the "poor and worthy widows" of Yellow Springs. Although the land was used to create Gaunt Park, and thus does not generate rent, the village expanded the bequest to include sugar. It still delivers flour and sugar to the village's widows at Christmas time, a tradition that generates annual media coverage.[7]

During the Red Scare of the 1950s, Yellow Springs and Antioch College came under scrutiny for alleged sympathies of faculty and students to the Communist Party, due to many locals' support of left-wing politics.[8] After being questioned by the Ohio House Un-American Activities Committee, Antioch president Douglas McGregor released a statement in 1952 that "Antioch upholds the American tradition of academic freedom. This means the right to hear and investigate all sides of any question, including the question of Russia and Communism".[8]

By the late 1960s and early '70s, the village became a center of activity for the Civil Rights Movement and anti-war movement in southwestern Ohio. Villagers have retained a progressive cast in their politics, attracting new residents with similar ideas and establishing a unique sociopolitical demographic element in a primarily conservative region of the state.[5][9]

In 1979, Yellow Springs held the distinction of being the smallest municipality to pass an ordinance prohibiting discrimination based on sexual orientation.[10][11] As of 2014, it had the largest LGBT population of all Ohio's villages.[12]

The village takes its name from a nearby natural spring that is rich in iron ore, leaving a yellowish-orange coloring on the rocks. Now included within the nearby Glen Helen Nature Preserve,[14] in the mid-19th century, it became the center of a resort. In this period, many individuals traveled to areas of such springs, believing the waters had medicinal benefits.

There were 1,672 households of which 25.4% had children under the age of 18 living with them, 37.4% were married couples living together, 13.5% had a female householder with no husband present, 3.1% had a male householder with no wife present, and 46.1% were non-families. 39.2% of all households were made up of individuals and 15.4% had someone living alone who was 65 years of age or older. The average household size was 2.04 and the average family size was 2.70.

There were 1,587 households out of which 24.8% had children under the age of 18 living with them, 40.4% were married couples living together, 13.2% had a female householder with no husband present, and 43.5% were non-families. 35.9% of all households were made up of individuals and 10.4% had someone living alone who was 65 years of age or older. The average household size was 2.11 and the average family size was 2.73.

The only private elementary school in Yellow Springs is the Antioch School, a democratic school for students in preschool through sixth grade. It was founded by Arthur Ernest Morgan as a laboratory school of Antioch College.[18]

Antioch College was founded at Yellow Springs in 1850;[19] the city is also home to Antioch University Midwest.

Yellow Springs has a public library, a branch of the Greene County Public Library.[20]

Media
Yellow Springs is the home of public radio station WYSO, which is a member station of National Public Radio and is licensed to the Board of Trustees of Antioch College.

Local news and events are covered by an independent weekly newspaper, the Yellow Springs News.

Arts and culture
Relative to its size, Yellow Springs has a large arts community. Local organizations include: