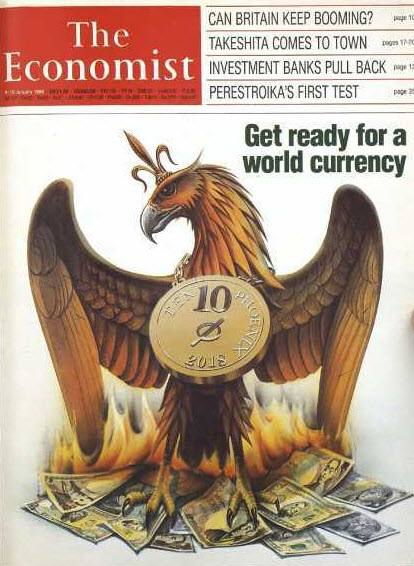 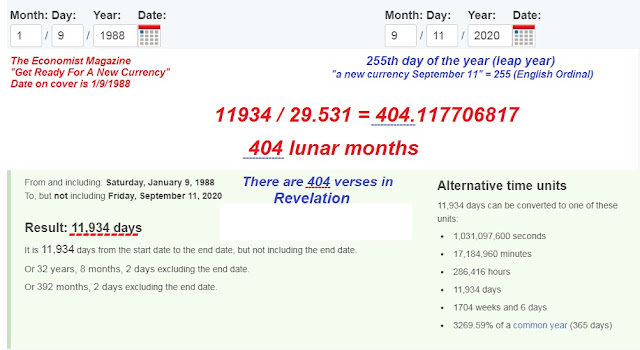 GET READY FOR A WORLD CURRENCY

Consider the title page of The Economist in 1988, (9 jan. 1988) presented above, which insinuated another world money and noticeably included “2018” on the spread. Most realize that the financial world often arrange things decades ahead of time. The euro currency is such a case.

“THIRTY years from now, Americans, Japanese, Europeans, and people in many other rich countries, and some relatively poor ones will probably be paying for their shopping with the same world currency.”

…The phoenix would probably start as a cocktail of national currencies, just as the Special Drawing Right is today. In time, though, its value against national currencies would cease to matter, because people would choose it for its convenience and the stability of its purchasing power……The phoenix zone would impose tight constraints on national governments. There would be no such thing, for instance, as a national monetary policy. The world phoenix supply would be fixed by a new central bank, descended perhaps from the IMF…

…Governments are far from ready to subordinate their domestic objectives to the goal of international stability. Several more big exchange-rate upsets, a few more stockmarket crashes and probably a slump or two will be needed before politicians are willing to face squarely up to that choice…

Bakkt Closes Series B Funding and Raises $300 Million from Microsoft 3/16/2020
Bakkt closed a $300 million Series B fundraising round. The round was led by Microsoft’s M12, Pantera Capital. PayU and other prominent companies.

"Get ready for a new currency September eleven" = 440 (English Ordinal)