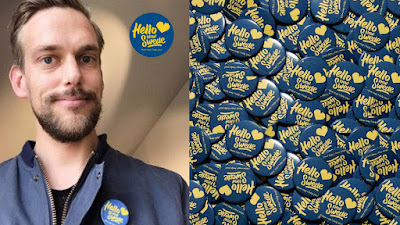 The Local reports on a recent story, out of the anti-Swedish publication Metro, about cucked Thomas Bergman who developed the badge “Hello New Swede, How Can I Help You?” welcoming invaders, with a desire to serve.

Naturally this is the guy that get nation wide news coverage, for his "correct" display of ethnomasochism. As opposed to the Nordic Resistance Movement member Robin Boström, who last week confronted the scum that gang raped a helpless Swedish woman in a wheelchair - for hours - on the island Gotland, on the east coast of Sweden.

In fact the response to the consequent protests in Gotland, after the perpetrators were let free, was to launch a "counter-protest" to show their discontent with the "racists" that were trying to use this gang rape for their own "racist" purposes.

Approving of rape of a women in a wheelchair - is the new "anti-racism." These people are something else. Here is the story from The Local:

A wheelchair-bound Swedish woman says she was gang-raped by five migrants who were then released days after their arrest, as the victim allegedly did not do enough to fight off her attackers, according to prosecutors.
The incident has sparked outrage and protest in the town of Visby, on the Baltic island of Gotland, due to the authorities’ refusal to detain or report the nationalities of the attackers.

The unnamed disabled woman, in her thirties, had asked to use a toilet at a nearby asylum centre after sharing a taxi with one of its residents on the 2nd of October.

However, after she was invited inside, the man and six of his fellow migrants attacked her, taking turns to rape the woman for several hours at the facility in Visby.

Authorities have attempted to shield the identities of the attackers, in line with Swedish police policy that protects the ethnicity of criminals when they are non-Swedish, in a bid to protect the force from accusations of racism.

Despite the attackers being arrested on the evening of the alleged attack, they were released just days later. The migrants denied the attack and it was said that as the woman did not resist sufficiently, the incident can not be classed as rape according to Swedish law.

WE'RE COMING FOR YOU SWEDEN!

My work on Swedish PM and arms sales to Saudi Arabia