The Most Explosive WikiLeaks Clinton Revelations (So Far) 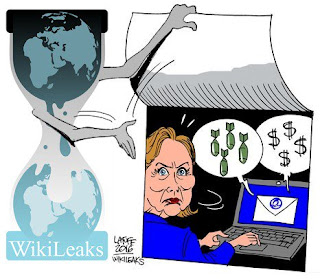 Here is a rundown of some of the biggest bombshells dropped by WikiLeaks’ disclosure of Hillary Clinton’s speeches and emails, and why each is so important.
1. Clinton dreams of a world with “open trade and open borders”: Every American should understand that Democrats, and plenty of Republicans, are fighting an all-out war against national sovereignty. Sure, Democrats want new voters, and Republican interests want cheap labor, but they also share a mutual desire to increase the distance between the Ruling Class and voters. In the globalist future, political and business titans will stand atop the world, without having to worry about fulfilling annoying duties to grubby little voters with nostalgic memories of the days when American politicians served America’s interests. Globalism means you’ll never be able to vote against anything.

2. Clinton courted business elites to support liberal agenda to beat back populism: Clinton’s speeches include numerous examples of something that’s hardly new, or unique to her, but a very important harbinger of things to come if she gets into the White House. Democrats serve their voters a steady stream of anti-business, anti-wealth rhetoric, but they’re keenly interested in using Big Business to promote the agenda of Big Government. Some of the examples in the leaked speeches, such as Clinton urging business interests to beat back the Tea Party and support open-borders immigration, are points of common interest with the GOP Establishment.

3. Clinton campaign coordinated with Super PAC: No one familiar with the WikiLeaks disclosures should be able to restrain their laughter when Hillary Clinton talks about getting “big money” and “dark money” out of politics. Then again, she should have been laughed off the stage for such tirades long before WikiLeaks started releasing her campaign’s emails.