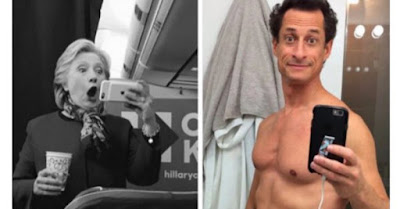 WASHINGTON — Federal law enforcement officials said Friday that the new emails uncovered in the closed investigation into Hillary Clinton’s use of a private email server were discovered after the F.B.I. seized electronic devices belonging to Huma Abedin, a top aide to Mrs. Clinton, and her husband, Anthony Weiner.

The F.B.I. is investigating illicit text messages that Mr. Weiner sent to a 15-year-old girl in North Carolina. The bureau told Congress on Friday that it had uncovered new emails related to the Clinton case — one federal official said they numbered in the thousands — potentially reigniting an issue that has weighed on the presidential campaign and offering a lifeline to Donald J. Trump less than two weeks before the election.

After deriding the F.B.I. for weeks as inept and corrupt, Mr. Trump went on to praise the law enforcement agency.

“I have great respect for the fact that the F.B.I. and the D.O.J. are now willing to have the courage to right the horrible mistake that they made,” Mr. Trump said. “This was a grave miscarriage of justice that the American people fully understand. It is everybody’s hope that it is about to be corrected.”