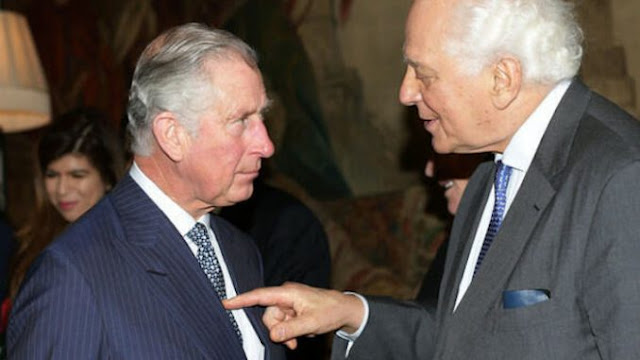 Sir Evelyn de Rothschild has urged western nations to “unite as one” in order to “intervene” in Syria and overthrow Assad to “usher Syrians into the new century.”

Describing Assad as “a brutal dictator who must be bought to heel” during a grim speech at a fundraiser in the City of London financial district, Rothschild demanded that western nations “topple the Assad regime” because it is “resistant to common decency” and a threat to our “corporate values.“

Rothschild also referred to his family businesses which originated with five brothers setting up the “first and only truly global banking system,” operating from London, Paris, Vienna, Naples and Frankfurt just before the turn of the 19th century.

He said: “These five brothers, working together to exchange information and ideas, built an extraordinary business that superseded boundaries and cultures.

“Just over 200 years later, these business ideals, which have stood the test of time, are now under threat by despotic regimes that are resistant to common decency. These regimes pose a threat to our international corporate values.”

Sir Evelyn, a billionaire financier who is married to Lynn Forester de Rothschild, did not explain why world governments should listen to his demands for interventionist wars in the Middle-East.

However it has been suggested he is advocating for the invasion of Syria because the nation remains one of only five nations left in the world that does not have a Rothschild controlled central bank.

The Rothschilds have murdered around a half a billion people! WHEN are they going to be brought to justice?
Posted by JE Aggas at 4:14 PM