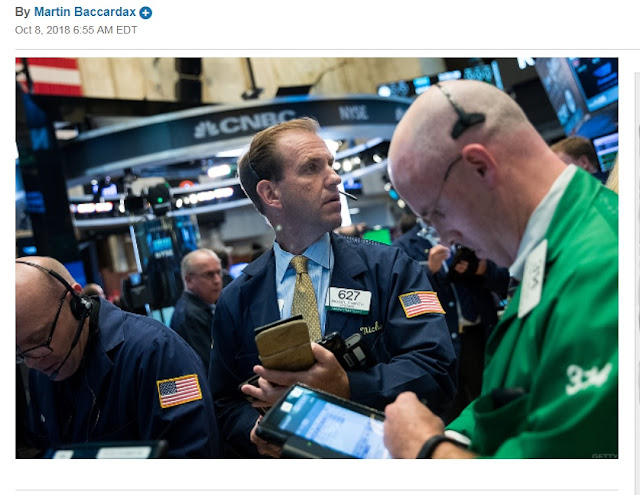 Global equities tremble Monday as investors in China returned from their Golden Week celebrations and slashed prices for domestic stocks amid the ongoing trade and diplomatic tensions between Washington and Beijing, while markets in Europe were pinched by rising interest rates and slowing growth signals in most of the world's major economies.

Global stocks extended declines Monday, as markets in China fell the most since February, as trade and diplomatic tensions between Washington and Beijing pressure investors around the world.

Bond yields continue to rise, with benchmark 10-year Treasuries trading at 3.23% ahead of $230 billion in fresh supply this week, including 3-year, 10-year and 30-year paper.

European stocks tumble amid China concern, weaker-than-expected German industrial data and the ongoing standoff between Italy and the EU over spending plans.
U.S. equity futures are weaker, with the Dow looking at a 70 point opening bell decline, but with bond markets closed for the Columbus Day holiday, volatility could increase.

Global equities trembled Monday as investors in China returned from their Golden Week celebrations and slashed prices for domestic stocks amid the ongoing trade and diplomatic tensions between Washington and Beijing, while markets in Europe were pinched by rising interest rates and slowing growth signals in most of the world's major economies.

U.S. equity futures, however, are attempting to hold their ground, although the Dow Jones Industrial Average is expected to open 70 points lower at the opening bell, while the broader S&P 500 is looking at a 9 point pullback, as the "risk-off" sentiment from Europe and China ripples through markets and investors brace for $230 billion in new Treasury bond sales just days after the biggest fixed income selloff in nearly two years.

Benchmark 10-year government bonds yields held steady at 3.23% in overnight trading, although bond markets in the U.S. will remain closed today owing the Columbus Day holiday, with investors prepping for one of the most active weeks of the year for new bond sales that includes $72 billion in 3-year, 10-year and 30-year paper.

China's Shanghai Composite fell 3.7% by the close of trading, while the tech-focused CSI 300 slumped 4.3% as investors dumped stocks following a series of headline risks last week, including allegations of China meddling in U.S. elections by President Donald Trump and the potential 'back door' hacking of servers linked to tech giants Amazon (AMZN) and Apple (AAPL) .

The People's Bank of China attempted to mitigate some of those concerns Sunday, when its cut the so-called Reserve Requirement Ratio for its domestic banks in a move that will free up around $110 billion in fresh liquidity, but the market's desire to "catch up" to last week's global equity declines was simply too powerful.

Investors continued to sell off Italian government bonds on Monday as the country’s populist government clashed with the European Union over budget targets.

Yields on the country’s 10-year bonds hit a 4½ year high, rising 17 basis points to 3.593%. The two-year bond yield jumped to 1.557% near its highest level since June. Bond yields move inversely to prices.

Could Italy be the next Greece? Investors show growing concerns

Comparing the Italian 10-year bond to other government bonds in Europe, only Greece has a higher yield.

Greece's yield on the 10-year bond is at 4.64 percent; whereas the equivalent yields in Portugal and Spain are at 1.95 and 1.59 percent, respectively.

The difference between these four yields suggest that Greece and Italy are seen to be riskier than Portugal and Spain.

Italian government bonds are increasingly seen as riskier investments given the anti-establishment Cabinet and its public spending plans — so much so, that Italian bonds are moving closer to being seen to be as risky as Greece's.

The yield on the 10-year Italian government bond is currently at 3.58 percent — the highest level in over five years.

The yield (or interest rate) on a bond — which is basically a piece of paper that, in this case, a government sells to raise money — indicates the perception that investors have about that investment.

For instance, if the yield on a bond is moving higher, it suggests that investors are associating more risk with that bond and, consequently are demanding a higher rate of interest in return for their investment.

Comparing the Italian 10-year bond to other government bonds in Europe, only Greece has a higher yield. Greece's yield on the 10-year bond is at 4.64 percent; whereas the equivalent yields in Portugal and Spain are at 1.95 and 1.59 percent, respectively. 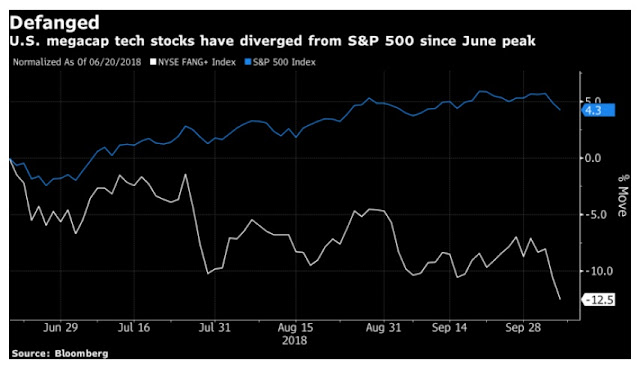 Strong economic growth will encourage the Fed to keep raising interest rates, even if the tightening sucks out more liquidity than financial markets can tolerate, said Yves Bonzon, chief investment officer at Julius Baer. That could drive the S&P 500 Index down about 20 percent before the equity losses start moderating the central bank’s actions, he said.

“I’m the most nervous I’ve been in a long time because I think we’re approaching that point,” he said at a press roundtable in Hong Kong on Monday, referring to when Fed tightening starts to drive a reversal in stocks. “The biggest beneficiary of the expansion of liquidity will be the biggest casualty, irrespective of their fundamentals.”

Bonzon says that the interplay between economic data and the share prices of the FANG stocks -- a loose grouping variously consisting of Facebook Inc., Apple Inc., Amazon.com Inc., Microsoft Corp., Netflix Inc., and Google parent Alphabet Inc. -- is his favored way to gauge whether liquidity conditions pose a risk to the broader market. The Swiss private bank has been reducing its holdings of U.S. stocks, while remaining “modestly overweight,” he said.

While the S&P 500 has powered to a string of all-time highs this year even against the backdrop of Fed interest-rate increases, the rally is facing a renewed threat from surging Treasury yields and the risk of economic fallout from the U.S.-China trade war. The NYSE FANG+ Index topped out in June, three months before the broader market’s current peak, and has fallen 13 percent since then.