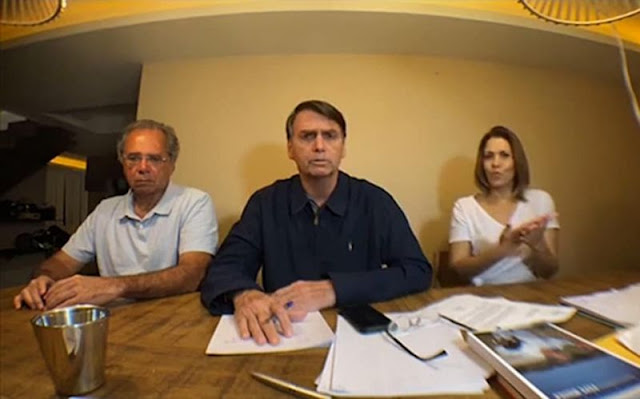 Mr Bolsonaro obtained 46.7 percent of the votes in Sunday's first-round vote, while Mr Haddad, the stand-in for jailed ex-President Luiz Inacio da Silva, got 28.37 percent, the president of the country's top electoral court said on Sunday.  The vote will be held on October 28.

The 63-year-old former paratrooper charged that "polling problems" cheated him of outright victory. Despite his complaints, Mr Bolsonaro did not formally contest Sunday's result, saying his voters "remain mobilised" for the second round.

His supporters protested the results outside the national electoral tribunal in the capital Brasilia, chanting "Fraud!" 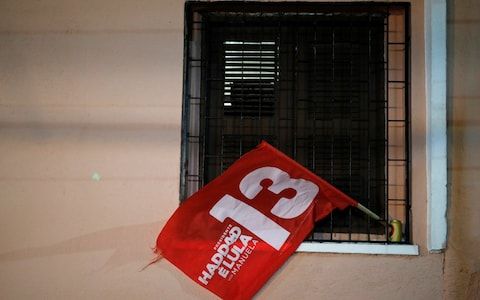 A flag of Fernando Haddad, presidential candidate of Brazil's leftist Worker Party (PT), is seen in a window, in Fortaleza Credit: Reuters

The Workers' Party was launched by a heterogeneous group made up of militants opposed to Brazil's military government, trade unionists, left-wing intellectuals and artists, and Catholics linked to the liberation theology, on 10 February 1980 at Colégio Sion in São Paulo, a private Catholic school for girls. The party emerged as a result of the approach between the labor movements in the ABC Region – such as the Conferência das Classes Trabalhadoras (Conclat), which later developed into the Central Única dos Trabalhadores (CUT) – which carried major strikes from 1978 to 1980, and the old Brazilian left-wing, whose proponents, many of whom were journalists, intellectuals, artists, and union organizers, were returning from exile with the 1979 Amnesty law, many of them having endured imprisonment and torture at the hands of the military regime in addition to years of exile. Dilma Rousseff herself was imprisoned and tortured by the dictatorship.

The party was launched under a democratic socialism trend. After the 1964 coup d'état, Brazil's main federation of labor unions, the General Command of Workers (Comando Geral dos Trabalhadores – CGT) — which since its formation gathered leaders approved by the Ministry of Labour, a practice tied to the fact that since the Vargas dictatorship, unions had become quasi-state organs —, was dissolved, while unions themselves suffered intervention of the military regime. The resurgence of an organized labour movement, evidenced by strikes in the ABC Region on the late 1970s led by Lula, enabled the reorganization of the labour movement without the direct interference of the State. The movement originally sought to act exclusively in union politics, but the survival of a conservative unionism under the domination of the State (evidenced in the refoundation of CGT) and the influence exercised over the trade union movement by leaders of traditional left-wing parties, such as the Brazilian Communist Party, forced the unionist movement of ABC, encouraged by anti-Stalinist leaders, to organize its own party, in a strategy similar to that held by the Solidarność union movement in Poland.

Therefore, the Workers' Party emerged rejecting the traditional leaders of official unionism, and seeking to put into practice a new form of democratic socialism, trying to reject political models it regarded as decaying, such as the Soviet and Chinese ones. It represented the confluence between unionism and anti-Stalinist intelligentsia. 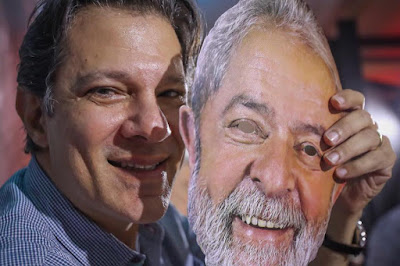 Fernando Haddad (born 25 January 1963) is a Brazilian academic and politician who served as Mayor of São Paulo from 2013 to 2017. He is the Workers' Party candidate for President of Brazil in the 2018 election, replacing former President Luiz Inácio Lula da Silva, whose candidacy was barred by the Superior Electoral Court under the Clean Slate law. Haddad will face Jair Bolsonaro in the run-off of the election.

He is of Lebanese Orthodox Christian origin and studied law, economics and philosophy at the University of São Paulo. He was Minister of Education from 2005 to 2012 in the cabinets of Luiz Inácio Lula da Silva and Dilma Rousseff.

Haddad was born in São Paulo, the second of three children of salesman Khalil Haddad, a Lebanese immigrant in Brazil, and Norma Teresa Gousain, the daughter of Lebanese immigrants. Haddad has two sisters, Priscila and Lúcia. Their mother is a spiritist. Haddad's grandfather Cury Habib Haddad, whom he did not meet, was a priest for the Eastern Orthodox Church in Lebanon.

Haddad attended high school at Colégio Bandeirantes, and in 1981 entered the Law School of the University of São Paulo as an undergraduate.

Haddad was announced as Lula da Silva's running mate in the 2018 presidential election in August 2018. However, the Superior Electoral Court ruled on 31 August that the former president is ineligible to run because his candidacy doesn't qualify under the Ficha Limpa law, which bans people convicted on appeal from running for public office; Lula was arrested in April after his conviction for corruption was upheld by the federal court of the fourth region. On 11 September 2018, Haddad was named by the Workers' Party as Lula's replacement, with Communist Party legislator Manuela d'Ávila taking Haddad's place as the vice presidential candidate.

Haddad came in second place in the first round of the election with 29% of the vote, behind Jair Bolsonaro, who had 46%. The two will face again in the run-off on 28 October 2018 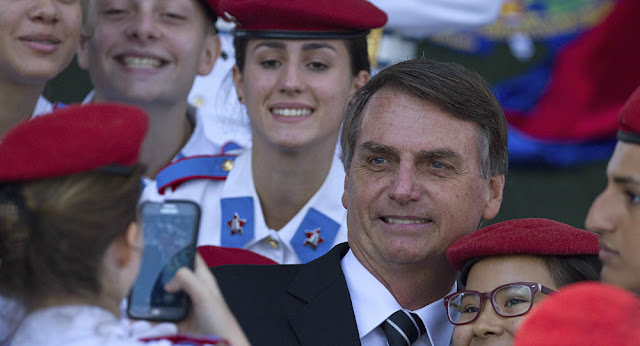 The party was originally founded in 1994 by businessman Luciano Bivar as a social liberal party.

In 2015, the PSL underwent a reform led by the internal social liberal wing Livres, with names such as political scientist Fábio Ostermann and journalist Leandro Narloch reinforcing the party's affiliation with social liberal policies. On 5 January 2018, controversial right-wing politician Jair Bolsonaro became a member of the party, which prompted the Livres wing to leave the party in protest of Bolsonaro's social conservative views. After the exit of Livres, the party followed a national-conservative path. Since then, the party has discussed a name change either to Republicans (Republicanos) or Mobilize (Mobiliza).The party also changed its colors from purple to the more nationalist blue, yellow and green, the colors of the flag of Brazil.

The party supported the impeachment of President Dilma Rousseff

Since Bolsonaro's entrance in the party, the party has changed much of its ideologies, abandoning its former social liberal policies while keeping its economic liberal policies, supporting privatization and decentralization while at the same time adopting conservative social policies regarding abortion, legalization of marijuana and the teaching of gender identity in schools.

Jair Messias Bolsonaro (born 21 March 1955) is a Brazilian politician who has served as a member of the Chamber of Deputies, representing the state of Rio de Janeiro, since 1991. He is a member of the Social Liberal Party (PSL)

Born in Glicério, São Paulo, Bolsonaro graduated from the Agulhas Negras Military Academy in 1977 and served in the Brazilian Army's field artillery and parachutist groups. He became known to the public in 1986, when he penned an article for Veja magazine criticizing wages for military officials, after which he was arrested for fifteen days despite receiving letters of support from peers in the army; he was acquitted two years later

Bolsonaro joined the reserve in 1988 with the rank of captain, and ran for the Rio de Janeiro City Council that year, being elected as a member of the Christian Democratic Party. In 1990 Bolsonaro was elected to the lower chamber of Congress, and was subsequently re-elected six times. During his 27-year tenure as a congressman, Bolsonaro became known for his strong opposition to left-wing policies. Most notably, he has been a vocal opponent of same-sex marriage, abortion, affirmative action, drug liberalization, land reforms, and secularism. He has recently advocated for economic liberal policies. His controversial views and comments, which have been described as far-right and conservative in nature, have drawn both praise and criticism in Brazil.

Bolsonaro announced his pre-candidacy for president in March 2016 as a member of the Social Christian Party. However, he left the party in 2018 and joined the Social Liberal Party, which launched his presidential campaign in August 2018 with retired general Hamilton Mourão as his running mate. He portrays himself as an outsider and a supporter for family values. Bolsonaro came in first place in the first round of the general election on 7 October 2018, with PT candidate Fernando Haddad coming in second place. The two candidates will face again on 28 October.

Jair Bolsonaro was born on 21 March 1955 in the town of Glicério, São Paulo,[15] in the southeast region of Brazil, to Perci Geraldo Bolsonaro and Olinda Bonturi. Jair Bolsonaro is of Italian and German descent. According to Bolsonaro himself, his great-grandfather was German and was a soldier of Adolf Hitler: "He had no choice: either he was a soldier, or he would be killed", he said.

Bolsonaro is married to his third wife and has five children. His first wife was Rogéria Bolsonaro (with whom he has three sons: Flávio, Carlos and Eduardo). His second marriage was with Ana Cristina (with whom he has one son, Renan). His third and current wife is Michelle de Paula Firmo Reinaldo Bolsonaro, with whom he has his only daughter, Laura.[ While working in Congress, Jair Bolsonaro hired his wife as a secretary and over the next two years she received unusual promotions and her salary more than tripled. He had to fire her after the Supreme Federal Court ruled that nepotism is illegal in the public administration. As of 2016, Bolsonaro and his wife lived in Barra da Tijuca, Rio de Janeiro.