Just eight months ago, at a Paris gathering, Bolton told members of the Iranian exile group, known as the Mujahedeen Khalq, MEK, or People’s Mujahedeen, that the Trump administration should embrace their goal of immediate regime change in Iran and recognize their group as a “viable” alternative.

“The outcome of the president’s policy review should be to determine that the Ayatollah Khomeini’s 1979 revolution will not last until its 40th birthday,” Bolton said. (The 40th anniversary of the Iranian revolution will be on February 11, 2019.) “The declared policy of the United States should be the overthrow of the mullahs’ regime in Tehran,” Bolton added. “The behavior and the objectives of the regime are not going to change and, therefore, the only solution is to change the regime itself.”

As the Iranian expatriate journalist Bahman Kalbasi noted, Bolton concluded his address to the exiles with a rousing promise: “And that’s why, before 2019, we here will celebrate in Tehran!”


From Bolton speech to Black Sabbath is 770 days
There are 770 miles between the Temple Mount and the Great Mosque in Mecca. 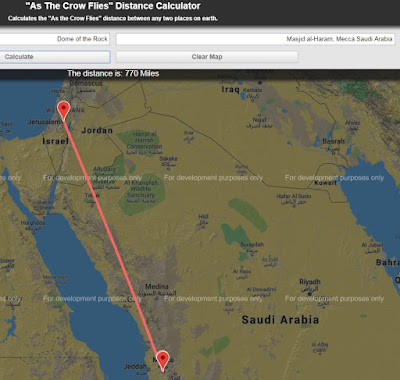 Tu B'Av / טו באב
Tu B'Av (Hebrew: ט״ו באב, the fifteenth of the month Av) is a minor Jewish holiday. In modern-day Israel, it is celebrated as a holiday of love (Hebrew: חג האהבה‎, Hag HaAhava), similar to Valentine's Day. It has been said to be a "great day for weddings".
"Tu B'Av" = 66 (English Ordinal)
"Wedding" = 66 (English Ordinal)