Pelosi got her seat after a death.... 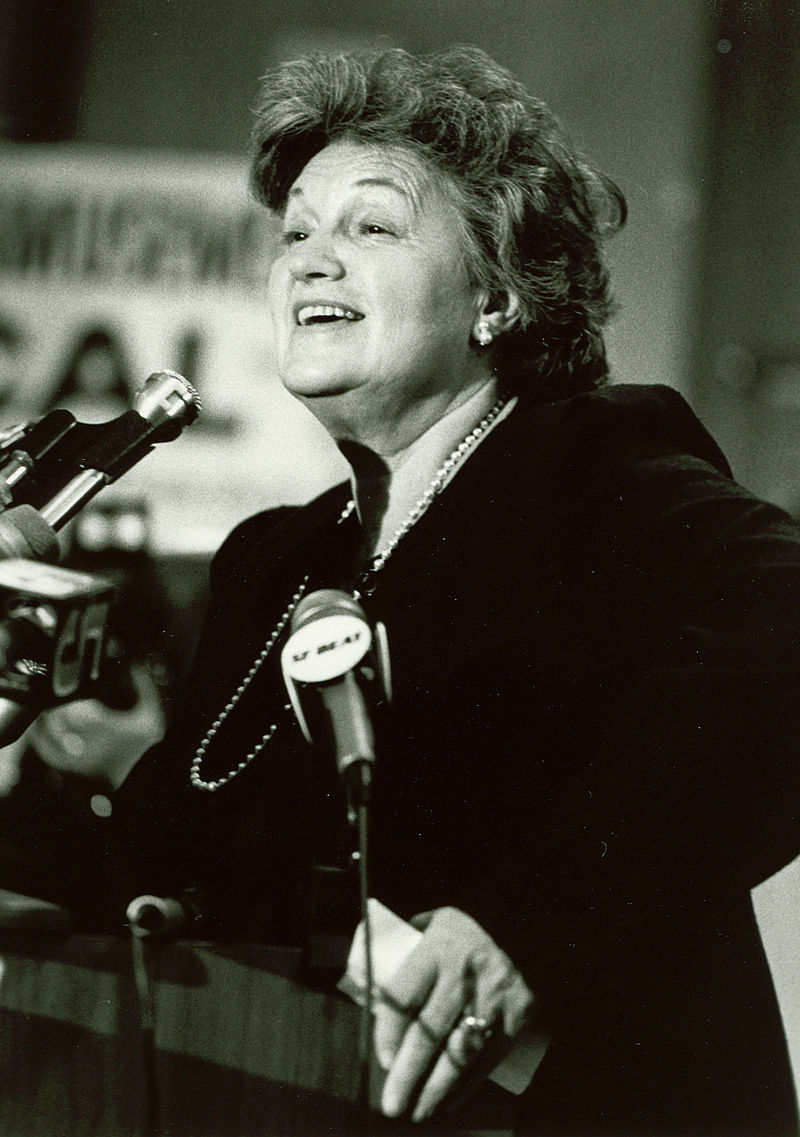 Sala Galant Burton (née Lipschultz; April 1, 1925 – February 1, 1987) was a Polish-born American politician who served as a United States Representative from California from 1983 until her death from colon cancer in Washington, D.C., in 1987.

She was born Sala Galant Lipschultz into a Jewish family in Białystok, Poland. The family immigrated 1939 before the German Invasion of Poland to the US, and she attended public schools in San Francisco and then University of San Francisco.

She died from colon cancer on February 1, 1987, in Washington, D.C., and was buried in the Presidio of San Francisco.

Early life and education
Pelosi was born in Baltimore to an Italian-American family. She was the only girl and the youngest of seven children of Annunciata M. "Nancy" D'Alesandro (née Lombardi)[8] and Thomas D'Alesandro Jr.,[9] who both had Italian roots.[9] Her mother was born in Campobasso,[8] in South Italy, and her father could trace his Italian ancestry to Genoa, Venice and Abruzzo.[9] When Nancy was born, her father was a Democratic Congressman from Maryland (and he became Mayor of Baltimore seven years later).[9][10][11] Pelosi's mother was also active in politics, organizing Democratic women and teaching her daughter the value of social networking.[1] Pelosi's brother, Thomas D'Alesandro III, also a Democrat, was Mayor of Baltimore from 1967 to 1971.[12]

Pelosi was involved with politics from an early age. She helped her father at his campaign events. She attended John F. Kennedy's inaugural address when he was sworn in as U.S. president in January 1961.[9]

In 1958, Pelosi graduated from the Institute of Notre Dame, an all-girls Catholic high school in Baltimore. In 1962, she graduated from Trinity College in Washington, D.C. with a Bachelor of Arts in political science.[13] Pelosi interned for Senator Daniel Brewster (D-Maryland) in the 1960s alongside future House majority leader Steny Hoyer.[14]

Phillip Burton died in 1983 and was succeeded by his wife, Sala. In late 1986, Sala became ill with cancer and decided not to run for reelection in 1988. She picked Pelosi as her designated successor, guaranteeing her the support of the Burtons' contacts.[17] Sala died on February 1, 1987, just a month after being sworn in for a second full term. Pelosi won the special election to succeed her, narrowly defeating San Francisco supervisor Harry Britt on April 7, 1987, then easily defeating Republican candidate Harriet Ross on June 2, 1987; Pelosi took office a week later.[18][19]

Pelosi represents one of the safest Democratic districts in the country. Democrats have held the seat since 1949 and Republicans, who currently make up only 13 percent of registered voters in the district, have not made a serious bid for the seat since the early 1960s. She won reelection in the regular election in 1988 and has been reelected another 16 times with no substantive opposition, winning with an average of 80 percent of the vote. She has not participated in candidates' debates since her 1987 race against Harriet Ross.[20] The strongest challenge Pelosi has faced was in 2016 when Preston Picus polled 19.1% and Pelosi won with 80.9%.[21]

For the 2000 and 2002 election cycles, she held the distinction of contributing the most money among members of Congress to other congressional campaigns.[22]

President George W. Bush meets with speaker-designate Pelosi and House Minority Whip Steny Hoyer on November 9, 2006
In the 2006 midterm elections, the Democrats took control of the House, picking up 30 seats.[29] The change in control meant as House minority leader, Pelosi was widely expected to become speaker of the House in the next Congress.[30][31] On November 16, 2006, the Democratic caucus unanimously chose Pelosi as the Democratic candidate for speaker.[32]

In the 2018 midterm elections, the Democrats regained a majority of seats in the House. On November 28, House Democrats nominated Pelosi to once again serve as speaker of the House.[83] She was formally re-elected to the speakership at the start of the 116th Congress on January 3, 2019. Pelosi "clinched the speakership after weeks of whittling down opposition from some fellow Democrats seeking a new generation of leadership. The deal to win over holdouts put an expiration date on her tenure: she promised not to stay more than four years in the job". Two hundred twenty House Democrats voted to elect Pelosi speaker, while 15 other House Democrats cast their ballots for someone else or voted present.[84]

On February 4, 2020, at the conclusion of President Trump's State of the Union, Pelosi tore up her official copy of his speech.[

Impeachment of President Trump
Main article: Impeachment of Donald Trump
With Pelosi having successfully impeached President Trump on December 18, 2019, and on the eve of his trial before the U.S. Senate, The Washington Post political writer Paul Kane called her the most powerful House speaker in at least twenty-five years,

Education
In 1999, Pelosi voted against displaying the Ten Commandments in public buildings, including schools.[140] Pelosi voted for the No Child Left Behind Act,[141] which instituted testing to track students' progress and authorized an increase in overall education spending.[142][143]

Personal life
Nancy Pelosi met Paul Frank Pelosi while she was attending college.[263] They married in Baltimore at the Cathedral of Mary Our Queen on September 7, 1963.[264] After the couple married, they moved to New York, and then to San Francisco in 1969, where Paul Pelosi's brother, Ronald Pelosi, was a member of the City and County of San Francisco's Board of Supervisors.[265]

Nancy and Paul Pelosi have five children: Nancy Corinne, Christine, Jacqueline, Paul, and Alexandra, as well as nine grandchildren.[266] Alexandra, a journalist, covered the Republican presidential campaigns in 2000 and made a film about the experience, Journeys with George. In 2007, Christine published a book, Campaign Boot Camp: Basic Training for Future Leaders.[267]

Pelosi resides in the Pacific Heights neighborhood of San Francisco.[268][269] Her 2016 financial disclosure report lists among her assets a combined home and vineyard in St. Helena, California, two commercial buildings in San Francisco, and a townhome in Loomis, California