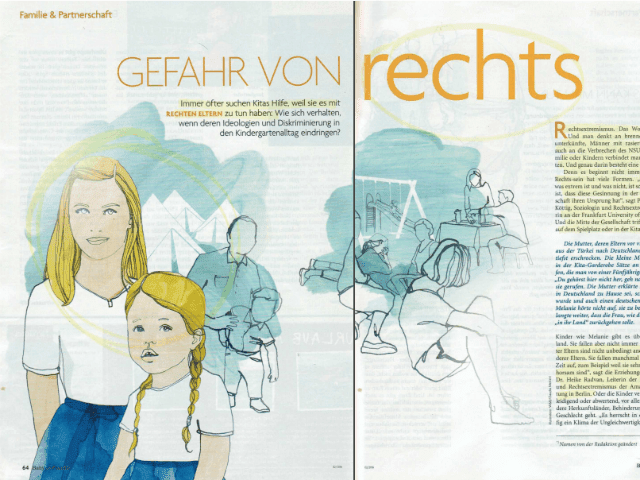 Published on Sep 25, 2016
The German parenting Magazine "Baby and Family" printed a story where the Amadeu Antonio foundation, an openly anti-German organization run by former STASI spies, was consulted on how to properly identify children from Right Wing German families in day care centers in order to exclude them. The magazine has one of the widest circulation in Germany with almost 2 million readers every month. The article explained in detail how to spot and exclude dangerous "Right Wing kids" by noticing their hair color, clothing style and behavior. If you have long, blonde braided hair, behave inconspicuously, are obedient and your parents are dedicated to improving the community, you might be at risk of being a future Right Wing extremist.

Parenting magazine Baby & Family has told readers to beware of families who are “inconspicuous” and “cheerful”, as these warning signs indicate they are right wing and thus “dangerous”.

Depicted with illustrations featuring solely blonde women and children, the report says ordinary parents must take action against right-wing families and make clear that their ideology has no place in the world.

Asserting that the term “right wing” “stirs up anxiety” and brings to mind “burning refugee homes”, skinheads, and the National Socialist Underground (NSU) group who carried out a string of violent attacks on foreign people, Baby & Family notes that people “rarely connect it with women, family and children”.

This, the high-circulation German magazine declares, “is precisely the great risk” as such people are just as dangerous if not more so as gangs of Nazi skinheads. The identifying features of right-wing families, it contends, are that they are “inconspicuous, blond, cute and engaged”.

“First of all, [right-wing families] are nice and dedicated” Michaela Köttig, sociologist and researcher of right-wing extremism at the Frankfurt University of Applied Sciences, alleges.

Because of this, she says many parents will already have established good relations with them to the point that they “are no longer marginalised and at worst, get support”.

While there are different types of right-wing families, Baby & Family asserts that daycare centres should always seek help when dealing with them.

“The right has many forms. The definition of what is extreme and what is not is difficult”, it says, but asserts that all manifestations must be dealt with because right wingers could spread their views when meeting with other parents in the playground.

What a fucking outrage!

The Amadeu Antonio Foundation, established in 1998, is a German foundation engaging against far-right extremism, racism and anti-Semitism. The foundation’s primary aim is to nurture and encourage civil society in opposition to far-right culture throughout the country, following its motto “encouraging, consulting, funding”. It was founded by Karl Konrad Graf von der Groeben (de), with Anetta Kahane appointed as its chairwoman and Wolfgang Thierse, the former president of the Bundestag, named as its patron.

The Foundation is named after Amadeu Antonio Kiowa (de), one of the first victims of far-right violence after the reunification of Germany in 1990. On the evening of November 24 Antonio was attacked by a group of neo-Nazis in Eberswalde, and died on December 6 of his injuries.

Anetta Kahane (born 1954) is a German journalist and activist and the founder of the Amadeu Antonio Foundation.

Kahane was born in East Berlin in 1954 to Max Kahane and Doris Kahane. Her father Max Kahane was a member of Young Communist League and later the Communist party of Germany. Because her parents were Jewish and active in communism they had to flee the Nazi regime to Spain and later France.[1] She is the sister of the film director Peter Kahane.

Between 1974 and 1982 Kahane served as an unofficial employee of the Ministry for State Security (Stasi) in East Germany under the code name "Victoria". Stasi files connected to her work include more than 800 pages of reports. Among others, Kahane surveilled artists, students from West Berlin universities and West German television reporters.

Since 1998, Anetta Kahane served as the president and the founder of the Amadeu Antonio Foundation.[4] Her organisation works against xenophobia, antisemitism and right-wing extremism. In 2012 she was awarded the Moses Mendelssohn prize.

In 2015, the Amadeu Antonio Foundation followed the German Ministry of Justice's invitation to take part in a task force against hate speech on social media.