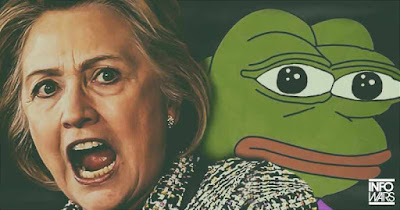 The embattled candidate has dedicated an entire page on her campaign site about the cartoon frog she believes is “racist.”

“That cartoon frog is more sinister than you might realize,” declared HillaryClinton.com. “Pepe is a cartoon frog who began his internet life as an innocent meme enjoyed by teenagers and pop stars alike.”

“But in recent months, Pepe’s been almost entirely co-opted by the white supremacists who call themselves the ‘alt-right.’”

In response to Hillary’s attack on Pepe, reddit users pointed out her campaign logo looks like the Twin Towers getting hit by a plane on 9/11.