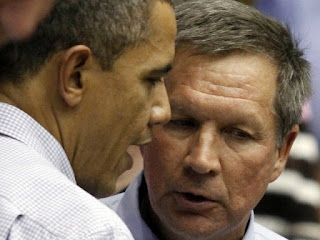 He lost badly in the Republican presidential primary election to now-nominee Donald Trump, refused to attend the Republican National convention in the state where he is governor, and now John Kasich is visiting President Barack Obama in the White House to help Obama pass the highly controversial trade agreement, the Trans Pacific Partnership (TPP).
“We now have a unique opportunity, again to put country in front of politics,” Kasich said during a White House press briefing along with Atlanta Mayor Kasim Reed who also attended the meeting. “The two nations that most vociferously oppose this agreement are China…” he continued, also mentioning Vladimir Putin.

“Are there losers in trade? Yes there are. And that’s why it’s important that we have a system that can retrain people for the jobs of the future,” said Kasich, who formerly voted for the North American Free Trade Agreement. In the White House press conference Kasich focused on implications of “if you don’t trade,” over the details of the proposed and secretive trade agreement. Kasich’s comments suggested that the option was TPP or no trade at all.

“I appreciate the President inviting the group that we had in there this morning,” Kasich said of Obama as the Ohio governor advocated for the President’s trade deal. “He’s very passionate that we need to do this.”