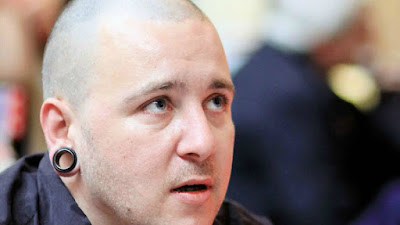 Writer Ghislain Gilberti and his son were savagely attacked on Saturday by a group of men shouting “filthy white”, seemingly Islamists enraged by one of his novels, police in France have heard.

Mr Gilbert and his 12-year-old son were attacked in Belfort, France on Saturday following harassment and attempted break-ins. Though an active antifascist, the writer and his family have received death threats from Salafists displeased that the prologue title of the novelist’s bestseller is “jihad”.

Police are investigating after Mr Gilberti was taken to hospital with a broken arm by firemen, following a reported street attack by Salafist Muslims.

Mr Gilberti said he received blows to his back before being called a “filthy white” by four men aged between 20 and 30 years, who held him down while attacking.

I imagine that this "active antifascist" was rather surprised when he was attacked by a gang of non-Whites.

Do you think he shouted "But I'm not a racist!" while being beaten?

The author reported the men also kicked his 12-year-old son in the head and stomach, shouting “it’s the same price for you” and “we don’t forgive, we don’t forget” at his 11-year-old daughter who was also present.

Police say they are aware of the incident, have interviewed witnesses and that they are currently trying to determine the circumstances of the assault.

I have no sympathy for this degenerate, but it is certainly unfortunate that his children suffered. However, this may prove to be a positive experience for them.