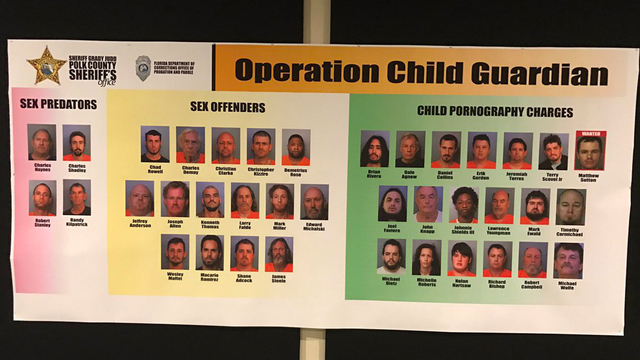 
WINTER HAVEN (FOX 13) - The Polk County Sheriff's Office announced Wednesday that 42 people were arrested as a result of an investigation focusing on child predators. One additional suspect, detectives say, is still at large.
According to PCSO, 18 of the suspects charged had engaged in the promotion, possession, and distribution of child pornography.
Some of the child porn uncovered during the investigation involved infants, Sheriff Grady Judd said.
One of those arrested, Erik Gorden, is a child counselor at Peace River Center. He is charged with 48 counts of possession of child pornography. PCSO says there is no indication at this time that Gorden has engaged in any unsavory behavior with the children at Peace River.
http://www.fox35orlando.com/news/235945547-story