Meet the terrorist behind the next women’s march 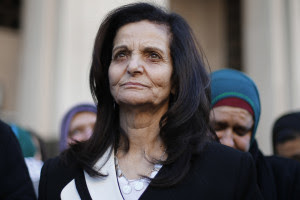 Here’s the left’s next great idea for bringing down President Trump: another women’s march. Which means another public instance of Trump haters shouting slogans to one another and mistaking it for constructive politics. What progressives need to defeat Trump is outreach, but all they have is outrage.
On March 8, organizers seem to be aiming for a different vibe than the librarians-in-pussy-hats element that made the first women’s march after Trump’s inauguration so adorable.
Instead of milling around Washington, organizers have in mind a “general strike” called the Day without a Woman. In a manifesto published in The Guardian on Feb. 6, the brains behind the movement are calling for a “new wave of militant feminist struggle.” That’s right: militant, not peaceful.
The document was co-authored by, among others, Rasmea Yousef Odeh, a convicted terrorist. Odeh, a Palestinian, was convicted in Israel in 1970 for her part in two terrorist bombings, one of which killed two students while they were shopping for groceries. She spent 10 years in prison for her crimes. She then managed to become a US citizen in 2004 by lying about her past (great detective work, INS: Next time, use Google) but was subsequently convicted, in 2014, of immigration fraud for the falsehoods. However, she won the right to a new trial (set for this spring) by claiming she had been suffering from PTSD at the time she lied on her application. Oh, and in her time as a citizen, she worked for a while as an ObamaCare navigator.
http://nypost.com/2017/02/25/the-next-womens-march-is-co-organized-by-a-terrorist/