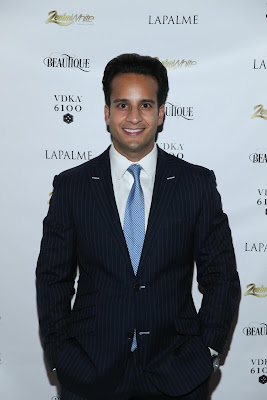 He wants to know the tooth!
Celebrity dentist Shawn Sadri says his Iranian heritage and distaste for President Trump got him bounced off a flight from Los Angeles to Kennedy Airport on Sunday.
According to Sadri, a 35-year-old immigrant who practices in L.A. and Manhattan, he was returning from Hollywood after a week of performing cosmetic dental work for his Oscars-bound clients when he was seated next to a “6- or 7-year-old boy” of Latino descent who was nervous and crying before takeoff.
“I asked the boy, ‘Are you OK? Are you traveling alone?’ ” says Sadri, whose bicoastal practice has been visited by actor Aaron Paul, and athletes Jose Canseco and Gabby Douglas.
“He didn’t speak a word of English and no one was with him,” Sadri said. “Out of nowhere, he runs down the aisle and starts screaming!”
Sadri says that’s when a flight attendant came over to see what was happening, and he joked: “Maybe Trump is trying to deport him.”
“Fine, you must be a Trump supporter,” he said he told the flight attendant. “And she said, ‘What if I am?’ So I said ‘If you are, you are, but you’re also incompetent and need to do your job. Why am I dealing with this kid?’”
Sadri says that security was “nice” as they booted him off of American Airlines Flight 292 and put him on the next American Airlines jet to New York an hour later.
http://www.nydailynews.com/entertainment/gossip/confidential/hollywood-dentist-booted-flight-anti-trump-comment-article-1.2983912
LOL
Posted by JE Aggas at 6:13 AM