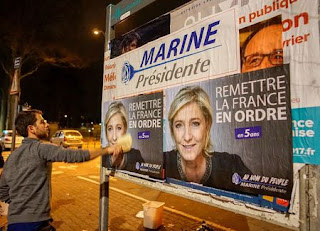 Bertrand Hourdel proudly pats one of his plump pigs, but the Brittany farmer is painfully aware that when he sells them, his profits, if any, will be slim.
He blames the European Union’s “straitjacket” of regulations and inaction by politicians from establishment parties for French farming’s deepest crisis since the Second World War.
Brittany’s verdant pastures and ancient stone farmhouses are a picture of bucolic bliss, but anger and desperation in France’s leading agricultural region, and other rural areas, are shifting the political winds in favour of Marine Le Pen’s anti-EU Front National.
Some recorded six-figure losses and many were driven into debt. More than 600 livestock farms went bankrupt — a record. On average, one farmer committed suicide every two days, according to France’s public health agency.
http://www.telegraph.co.uk/news/2017/02/25/french-farmers-hope-marine-le-pen-will-free-eu-straitjacket/
Posted by JE Aggas at 3:34 PM