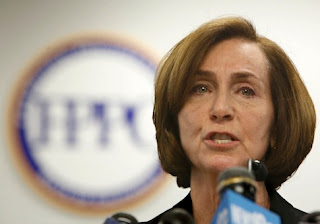 February 19, 2017 12:45 pm
A Democratic Federal Election Commission official who pushed to regulate the internet and has been absent from public meetings for months is resigning, according to an announcement.
Ann Ravel, who wanted to regulate political speech on the internet from websites such as the Drudge Report, announced Sunday that she is stepping down from her post.
Ravel’s resignation will be effective March 1.
The Democratic commissioner has come under fire on numerous occasions in the past due to her desire to regulate online political speech—actions some viewed as targeting conservative websites.
http://freebeacon.com/issues/internet-regulating-fec-commissioner-resign/

“The ability of the commission to perform its role has deteriorated significantly,” said Ms. Ravel, who has sparred bitterly with the Republican election commissioners during her three years on the panel. She added, “I think I can be more effective on the outside.”
Her departure will probably set off an intense political fight over how a new commissioner should be picked. By tradition, Senate Democrats would be allowed to select the replacement, but, by law, the choice belongs to the president, and Mr. Trump has shown little interest in Washington customs.
The outcome could have a major impact on a commission long derided for inaction, even as record amounts of money have poured into campaigns. Spending during last year’s presidential and congressional races exceeded $6.9 billion, according to data from the Center for Responsive Politics, as “super PACs” and other outside groups spent freely as a result of the Supreme Court’s 2010 Citizens United decision.
Mr. Trump can pick a nominee himself so long as he does not choose a registered Republican, said Richard L. Hasen, an election law scholar at the University of California, Irvine. The panel, which already has three Republicans, cannot have more than three members from any political party.
https://www.nytimes.com/2017/02/19/us/politics/fec-elections-ann-ravel-campaign-finance.html?_r=0
Posted by JE Aggas at 2:41 PM