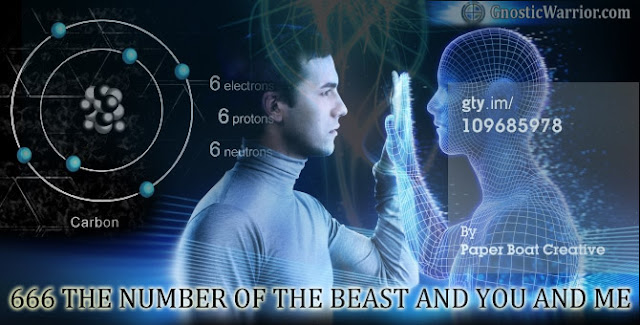 Carbon-12; one of 5 elements in the human DNA is composed of 6 protons, 6 electrons and 6 neutrons, which equates to 666.
https://gnosticwarrior.com/science-of-666.html

The English name carbon, comes from the Latin carbo for coal and charcoal, whence also comes the French charbon, meaning charcoal. Proof of 666 is found in the bible via Isaiah 6:6 - "Then one of the seraphim flew to me with a live coal in his hand, which he had taken with tongs from the altar. " The name Seraphim meaning "the burning ones", are the first hierarchy of angels who some call demons  that were Cherubim and Thrones. Beelzebub was a prince of the Seraphim, just below Lucifer.

Lucifer is another word for phosphorus. The Latin word corresponding to Greek Phosphorus is “Lucifer.”  Phosphorus (Greek Φωσφόρος Phōsphoros), a name meaning “Light-Bringer”, is the Morning Star. When phosphorus is combined with the elements below and carbon, it forms our very DNA.

When the 666 of Carbon is combined with the elements above and mixed with Lucifer, AKA Phosp-Horus, we get a combination or reaction of chemical elements that forms DNA and RNA. This magical god given chemical-code carrier is the very code for all life, and of course, it is the number of a man;  his number is 6 neutrons, 6 protons, and 6 electrons, Six hundred threescore and six (666). Various chemical elements when combined with Carbon, forms our very material reality, or what some may call, the Matrix.