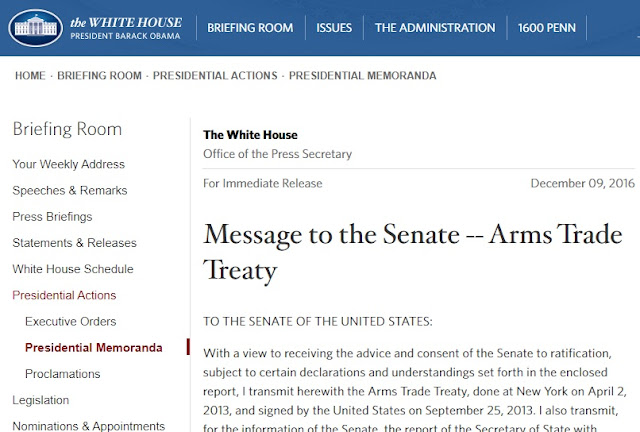 TO THE SENATE OF THE UNITED STATES:

With a view to receiving the advice and consent of the Senate to ratification, subject to certain declarations and understandings set forth in the enclosed report, I transmit herewith the Arms Trade Treaty, done at New York on April 2, 2013, and signed by the United States on September 25, 2013. I also transmit, for the information of the Senate, the report of the Secretary of State with respect to the Treaty, which contains a detailed article-by-article analysis of the Treaty.

The Treaty will strengthen our security without undermining legitimate international trade in conventional arms. The Treaty reflects the realities of the global nature of the defense supply chain in today's world. It will benefit U.S. companies by requiring States Parties to apply a common set of standards in regulating the defense trade, which establishes a more level playing field for U.S. industry. Industry also will benefit from the international transparency required by the Treaty, allowing U.S. industry to be better informed in advance of the national regulations of countries with which it is engaged in trade. This will provide U.S. industry with a clearer view of the international trading arena, fostering its ability to make more competitive and responsible business decisions based on more refined strategic analyses of the risks, including risks of possible diversion or potential gaps in accountability for international arms transfers, and the associated mitigation measures to reduce such risks in a given market.

The Treaty explicitly reaffirms the sovereign right of each country to decide for itself, pursuant to its own constitutional and legal system, how to deal with conventional arms that are traded exclusively within its borders. It also recognizes that legitimate purposes and interests exist for both individuals and governments to own, transfer, and use conventional arms. The Treaty is fully consistent with the domestic rights of U.S. citizens, including those guaranteed under the U.S. Constitution.

I recommend that the Senate give early and favorable consideration to the Treaty, and that it give its advice and consent to ratification of the Treaty, subject to the understandings and declarations set forth in the accompanying report.