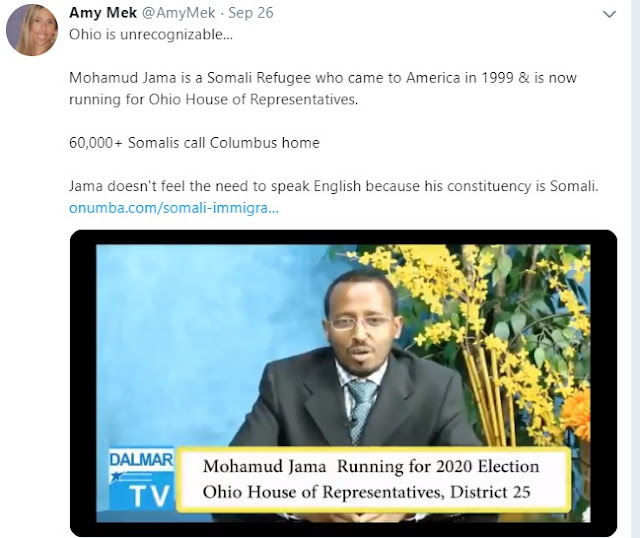 Onumba.com – Mohamud Jama has seen a steady stream of immigrants pouring into Columbus over the years. The city has handled the challenges pretty well. As an immigrant himself, he applauds the welcoming posture of local government leaders and community organizations in the face of the population boom. That warm embrace is precisely why Columbus is one of the most attractive places in the country for immigrants.

But as droves of New Americans move into the region stoking a shifting demography, Jama worries about them not having any voice in the political process. And nowhere is that cavernous void more visible and detrimental than the drought in the Ohio House of Representatives.

He feels now is the time to kibosh that void.

“We want our voice to be heard,” he told Onumba.com in a recent interview touching on a wide gamut of topics. “I saw the need to represent the immigrant community in the Ohio House of Representatives. We need representation, someone who understands their needs, someone they can relate to.”

As he campaigns for a chance to represent the 25th Ohio House District, Jama is touting his accomplishments from 1999 when he came to the United States from Kenya where his family took refuge after fleeing his homeland of Somalia mired in a brutal conflict that was stoked by the ouster of President Siad Barre in 1991.

After a brief stay in Atlanta, Jama relocated to Columbus in 2001 where he now calls home. He and his wife with their nine children are part of a bourgeoning population of New Americans settled in the city.

Born into a family of business people, Jama owns a real estate enterprise. He is a graduate of The Ohio State University with a Bachelor of Science degree in Electrical and Computer Engineering. And now, he is also a politician. He is looking to make history as the first African immigrant and Muslim to serve in the Ohio House of Representatives.

Seemingly, he has racked up an impressive community and civic pedigree to make a compelling case.

The 47-year old Jama is one of the founders of the Franklin County New American Advisory Council, where he continues to serve as a member. The council is a cabal of community leaders and other professionals involved in civic advocacy, helping to shape policies and programs affecting immigrants while bridging the gulf between the immigrant community and government officials.

Jama has also participated in myriad volunteering work in the community, including involvement with the Columbus branch of the American Red Cross.

A Democrat, he is a member of the Executive Committee of the Franklin County Democratic Party and has been involved in several local campaigns to elect democrats into office.

His years of community engagement, his perspicacity about immigrants, his commitment to helping others, plus his work in his own Somali community, all nicely converge into why Jama feels he is vastly suited for the role of a legislator.

“I understand the people of the district very well, the demographics of the 25th district,” said Jama. ” I can represent all the people in the district, including the New Americans.”

He added: “New Americans, that’s my base, but I am prepared to represent the entire 25th district.” The three priorities important to him are rolled up into his campaign mantra: “Together we can continue the growth of our community through education, small business development and healthcare for all.”

If elected, Jama vows to champion the cause of small businesses. He spoke about establishing a small business incubation where small business owners and those aspiring to go into business can obtain resources and assistance they need, such support as how to apply for a loan, tackle issues of payroll and taxes and even how to register a business.

Asked why he feels he is better prepared for a legislative job than his opponents, Jama replied, “Because I understand both worlds.”

And seemingly he does. That well-rounded lens through which Jama views immigrant’s problems comes from being an immigrant himself and having resided in central Ohio for decades. But even with that going for him, Jama is keenly aware of the seemingly entrenched odds against him. Other immigrants before him have tried and lost.  Mayo Makinde, Ibrahima Sow, Emmanuel Olawale, all have unsuccessfully contested for various local offices in the past.

But Jama is unfazed. Asked about the odds against him, he replied, “Experience is the key.”

Jama’s campaign strategy is two-pronged: First, tackle the deeply ensconced apathy in the immigrant community by convincing New Americans to go out and vote.  Part of the challenge would be unveiling for them to see and embrace the value of political representation for the collective immigrant community.

Second, funnel lessons learned from working in the trenches for other people’s campaigns into his own run.

“I know how to mobilize and organize the community,” he said, adding that he plans to recruit young people to be a part of his campaign.

The 25th House District consists of eastern and northeastern parts of Columbus plus an archipelago of Blendon, Clinton, Mifflin and Sharon townships.

Embattled Democrat Bernadine Kent, who now represents the District, has been mired in a messy daggers drawn with the House Democratic caucus and the Ohio Legislative Black Caucus (OLBC).