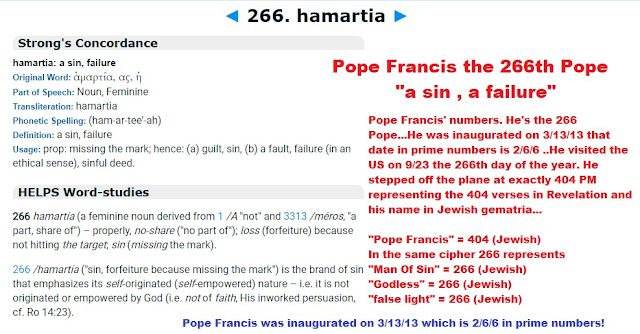 Pope Francis is a "man of sin" "Godless" False" "offensive"Pope Francis was born with the Sun at 266° of the eclipticPope Francis is evil! His job is to lead Christians into sin. The man is a demon and that's no joke!And of course he's named after Saint Francis of Assisi the patron saint of the ENVIRONMENT!And if that isn't bad enough guess who San Francisco is named after? That's right Saint Francis of Assisi!"The name San Francisco was inspired by colonists from Spain who in 1776 established the Mission San Francisco de Asis – named after Saint Francis of Assisi"And that gives Pope Francis another number 122Another big SIN number representing child sacrifice"Pope Francis" = 122 (English Ordinal)"San Francisco" = 122 (English Ordinal)"abortion" = 122 (Reverse Ordinal)Roe V Wade passed on 1/22/73Abortion till birth bill passed on 1/22/19They put up the "Arch of Baal" in NYC exactly 122 weeks before the "Abortion till birth" bill passed.The 122 number is associated with BAAL/Moloch and child sacrifice so of course Francis has to be associated with it."Pope Francis" = 122 (English Ordinal)He just put up a Moloch statue in the Vatican a week ago.And San Francisco has the "Golden Gate" bridge"Sodom and Gomorrah" = 180 (English Ordinal)"Golden Gate" = 180 (Reverse Ordinal)Which tells us why they named it the "Golden Gate""Golden Gate" = 239 (Jewish)23/9 Pope's visit 9/23 the 266th day of the year.And on and on it goes.......Pope Francis IS a Devil! He's working for the Devil, he's not even hiding it! Everything he does is Marxist or Satanic! Everything he does.
Posted by JE Aggas at 8:58 PM