"Virtual signaling by proxy syndrome" Is a disease in which primarily liberal women make their own country sick so they can get praise from the media for being "good and virtuous" while trying to help the victims of the problems they themselves are causing. Just like Munchausen by proxy syndrome the liberal women actually create major problems for the country so they can "look good" trying to fix them. A chilling disease which if not recognized could cause problems lasting for decades through multiple generations. This has been partially discussed with the phrase "virtue signaling" that assumes these women are just being opportunistic but it doesn't explore the possibility that they may actually be creating the problems on purpose for the sake of getting attention for being "good".

In Nancy Pelosi's case you have to ask is she deliberately creating economic hardship for poor and middleclass Americans so she can look "good" or "virtuous" by saving them with government handouts? The inflation currently being created in the US due to her policies would be a good example. Another example would be allowing 6 million new poor people to flood the country to compete for already stretched resources. That looks more like a pathology than a virtue to any sane person. 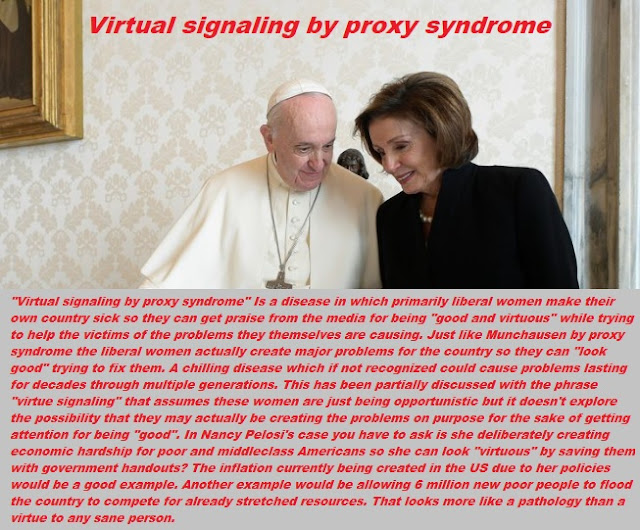