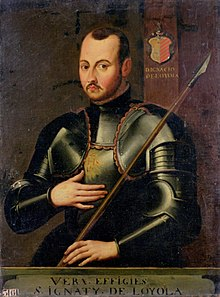 Ignatius of Loyola (c. 23 October 1491–31 July 1556; b. Iñigo López de Oñaz y Loyola; Basque: Ignazio Loiolakoa; Spanish: Ignacio de Loyola; Latin: Ignatius de Loyola)[2] — venerated as Saint Ignatius of Loyola — was a Spanish Catholic priest and theologian, who, with Peter Faber and Francis Xavier, founded the religious order of the Society of Jesus (The Jesuits), and became the first Superior General of the Society of Jesus, at Paris, in 1541.
Ignatius was beatified in 1609 and canonized, receiving the title of Saint, on 12 March 1622. His feast day is celebrated on 31 July. He is the patron saint of the Basque provinces of Gipuzkoa and Biscay as well as of the Society of Jesus. He was declared patron saint of all spiritual retreats by Pope Pius XI in 1922. Ignatius is also the foremost patron saint of soldiers
October 23, 1491
"X.XXIII.MCDXCI" = 155 (English Ordinal)
"Christianity" = 155 (English Ordinal)
"X.XXIII.MCDXCI" = 169 (Reverse Ordinal)
"Christianity" = 169 (Reverse Ordinal)
Ignatius was beatified in 1609
Posted by JE Aggas at 8:40 PM