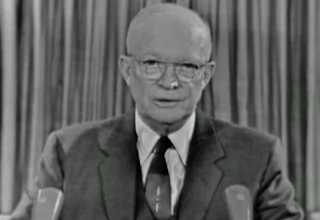 President Eisenhower spoke to the nation in a farewell address. The address, sometimes referred to as the "Military Industrial Complex Speech", is considered by some to be one of the most significant speeches of the Eisenhower presidency.

The military–industrial complex (MIC) is an informal alliance between a nation's military and the defense industry which supplies it, seen together as a vested interest which influences public policy. The term is most often used in reference to the system behind the military of the United States, where it is most prevalent and gained popularity after its use in the farewell address of President Dwight D. Eisenhower on January 17, 1961. In 2011, the United States spent more (in absolute numbers) on its military than the next 13 nations combined.

In a U.S. context, the trope is sometimes extended to military–industrial–congressional complex (MICC), adding the U.S. Congress to form a three-sided relationship termed an iron triangle. These relationships include political contributions, political approval for military spending, lobbying to support bureaucracies, and oversight of the industry; or more broadly to include the entire network of contracts and flows of money and resources among individuals as well as corporations and institutions of the defense contractors, The Pentagon, the Congress and executive branch.

A similar thesis was originally expressed by Daniel Guérin, in his 1936 book Fascism and Big Business, about the fascist government support to heavy industry. It can be defined as, "an informal and changing coalition of groups with vested psychological, moral, and material interests in the continuous development and maintenance of high levels of weaponry, in preservation of colonial markets and in military-strategic conceptions of internal affairs." An exhibit of the trend was made in Franz Leopold Neumann's book Behemoth: The Structure and Practice of National Socialism in 1942, a study of how Nazism came into a position of power in a democratic state.