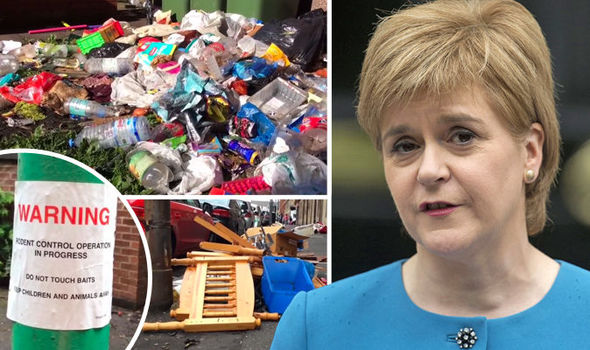 FIRST Minister of Scotland Nicola Sturgeon’s very own constituency has become a haven for illegal immigration and organised crime where women cannot walk the streets, it has been claimed.

Pensioners are arming themselves with keys as they are too afraid to go out while police are putting panic buttons inside elderly people's homes to protect them from violent thugs.

The slum-like conditions which have sparked protests across the once bustling Govanhill neighbourhood in Glasgow have left the community reeling.

Thousands of women have been forced to march in the streets as they are forced to deal with a massive surge in sex attacks.

And members of the public have even challenged Ms Sturgeon by filming her in the street.

The constituency of Govanhill had 3,500 Romanian migrants packed into a few streets of ramshackle tenement blocks in Govanhill, in the south of Glasgow even before the nation’s accession to EU in January 2014.

Now the pocket of Glasgow, which Ms Sturgeon only visits with armed police officers in tow, is in meltdown mode.

There is no clear information on how many different racial groups are in the broken down community, but figures show that there are 57 different languages spoken by their pupils in schools.

Somebody in Scotland needs to file a genocide lawsuit against Nicola Sturgeon before she wrecks the whole country!

United Nations Genocide Conventions
The crime of genocide is defined in international law in the Convention on the Prevention and Punishment of Genocide.

Article II: In the present Convention, genocide means any of the following acts committed with intent to destroy, in whole or in part, a national, ethnical, racial or religious group, as such:

Article III: The following acts shall be punishable:

A national group means a set of individuals whose identity is defined by a common country of nationality or national origin.

An ethnical group is a set of individuals whose identity is defined by common cultural traditions, language or heritage.

A racial group means a set of individuals whose identity is defined by physical characteristics.

A religious group is a set of individuals whose identity is defined by common religious creeds, beliefs, doctrines, practices, or rituals.﻿