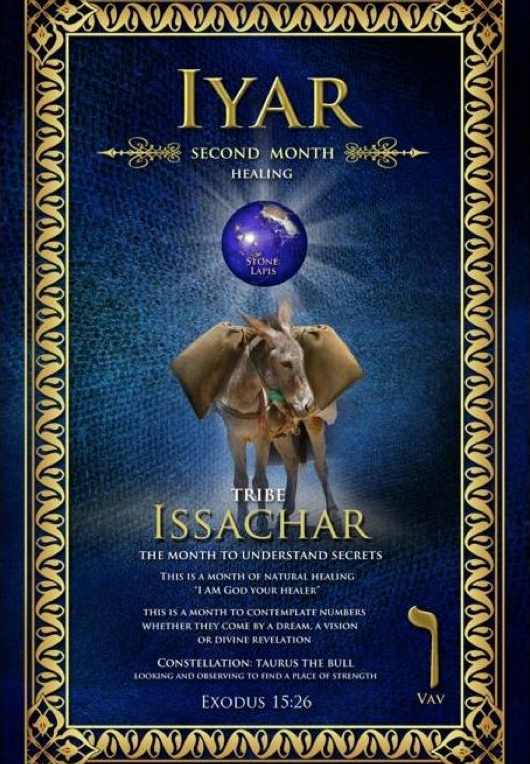 And it came to pass in the four hundredth and eightieth year after the children of Israel had come out of the land of Egypt, in the fourth year of Solomon’s reign over Israel, in the month of Ziv, which is the second month, that he began to build the house of the Lord.   (I Kings 6:1 NKJV)

We have now entered the biblical month of Iyar (ryya in Hebrew), which is the second month of the biblical calendar, in the year of Ayin Gimmel. In the bible the month of Iyar is called the month of Zif, which means radiance. This month is a vital point in the year that represents a time of connection, the month of healing and the time that mysteries are revealed. This month is very pivotal every year because it connects Passover (mercy) to Pentecost (grace, God’s enabling power). We are in such an amazing time in history as God is restoring His glory in the earth. We came out of captivity in 5770 (Sept. 2009 to Sept. 2010), became one again with the Father in 5771 (Sept. 2010 to Sept. 2011) and allowed Him to reorder us as His house in 5772 (Sept. 2011 to Sept. 2012) but now it is time to arise and shine as His glory fills us in a new way!

The month of Iyar is the second month of the spring season, which is comprised of the three months of Nissan, Iyar and Sivan. The three tribes corresponding to the months of spring are Judah, Issachar and Zebulon; who in the desert encampment around the tabernacle were situated to the East. Their joint camp was known as the camp of Judah, whose name means “praise”. Every year during the spring season we have an opportunity to spring forth into a new cycle of blessing and watch as God shows himself strong by delivering us from the hands of our enemies. This season begins with Passover, the Feast of Unleavened Bread, which celebrates the Lamb of God who took away the sins of the world. We also continue Counting the Omer (counting our blessings) this month which leads us into the Feast of Pentecost, where we receive fresh provision and power as Holy Spirit activates His fruits within us.

Iyar is also linked with the Tribe of Issachar, who was Jacob’s fifth son born to Leah. When Issachar was born Leah said, “God has given me my wages because I gave my servant to my husband”, as such his name means “there is recompense”. The root words for his name, nasa and sakar, mean to lift up or to bear and wages of one hired. When Jacob blessed Issachar he said, “Issachar is a strong donkey, crouching between the sheepfolds. He saw that a resting place was good, and that the land was pleasant, so he bowed his shoulder to bear, and became a servant at forced labor”. When Moses blessed Issachar he said, "Rejoice, Zebulun, in your going out, and Issachar, in your tents. They shall call peoples to their mountain; there they offer right sacrifices; for they draw from the abundance of the seas and the hidden treasures of the sand”. This is the only time we see Moses release a blessing that links two tribes. This reveals to us the importance of alignment.

Historically this month has been the turning point of many notable historical events. It was in the month of Iyar that the flood began and that the waters receded and the earth was dry as seen in Genesis 7:11 and Genesis 8:14. The Lord instructed Moses to count the children of Israel on the first of Iyar as seen in Numbers 1:1. King Solomon began the construction of the first temple during this month and years later those who had come out of Babylonian captivity started the rebuilding process during this second month. In more recent years the State of Israel was established on the 5th of Iyar in 1948, when its Declaration of Independence was signed by its founders. On this day the land promised by God to the Jewish people was restored to Jewish sovereignty for the first time in nearly two thousand years. Nineteen years later on the 28th of Iyar ancient Jerusalem was liberated in the Six Day war of 1967 and also restored to Jewish sovereignty. Historically this month has been filled with momentous occasions and I am expecting nothing less this year.