Coup BC : 841–Jehu kills Jehoram of Israel and Ahaziah of Judah, and becomes king of Israel.

ehu (Hebrew: יֵהוּא Yehu, meaning "Yahu is He"; Akkadian: Ia-ú-a; Latin: Iehu) was the tenth king of the northern Kingdom of Israel since Jeroboam I, noted for exterminating the house of Ahab. He was the son of Jehoshaphat,[1] grandson of Nimshi, and possibly great-grandson of Omri.[2] His reign lasted for 28 years.

Jezreel and deaths of Jehoram and Jezebel

With a chosen band, Jehu planned his conspiracy against King Jehoram and secretly entered Jezreel. King Jehoram tried to flee, but Jehu fired an arrow which pierced his heart. Jehu later threw his body on Naboth's vineyard, to avenge Naboth, whom Jehoram's father and mother had murdered.[6] King Ahaziah fled after seeing Jehoram's death but Jehu wounded him. Ahaziah, nonetheless, managed to flee to Megiddo, where he died.[4]

Jehu proceeded to enter the premises of the palace at Jezreel. Jezebel watched him from contempt from the palace window and mockingly compared him to King Zimri. Jehu later commanded Jezebel's eunuchs to throw her out of the palace window. They obeyed his commands and Jezebel was instantly killed. Jehu trampled over her body but after he decided to arrange a proper burial due to her royal descent, only her skull, hands and feet remained. The rest of her body was eaten by dogs. 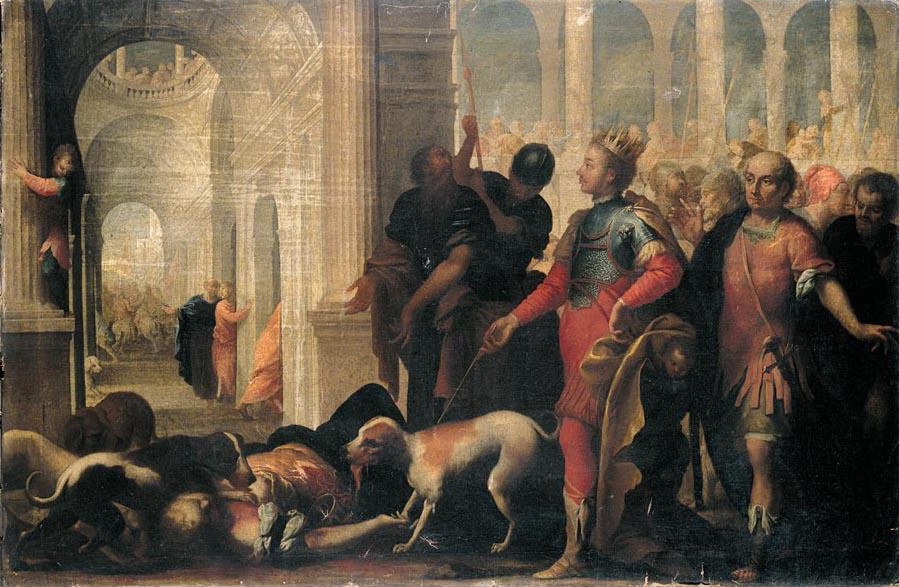 Queen Jezebel Being Punished by Jehu