The group, named Forke und Schaufel or Fork and Shovel, was founded in May to oppose lockdowns and other measures introduced in response to the pandemic.
It has already staged a number of demonstrations, and is reportedly planning one for November 28 outside the headquarters of biotechnology firm BioNTech in the German city of Mainz.
BioNTech, in partnership with pharmaceutical giant Pfizer, is one of a number of bodies around the world currently working on a vaccine for the coronavirus. 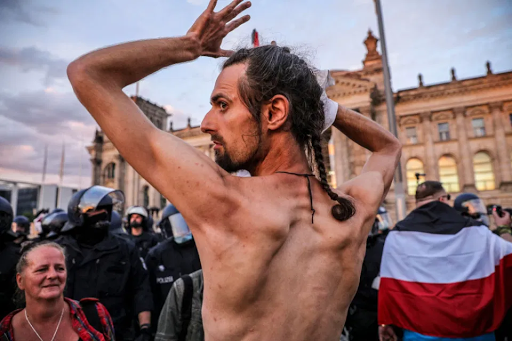 Last week, the firms announced their vaccine had been found to be 90 percent effective in trials, and that it could be ready for distribution in the next few months.
Forke und Schaufel (FaS), which describes itself as a "corona rebel" group, is opposed to the use of vaccines, and monitoring groups say it also has close ties to the German far-right, VICE World News reports.
Concerns have been raised that the country's far-right hopes to use the uncertain atmosphere of the pandemic to stoke a violent uprising against the government.
At an FaS demonstration on September 26, Stefan Räpple, then a member of the state parliament for the region of Baden-Württemberg with far-right party AfD, said: “We must overthrow the government, and do it by force.
"It doesn't work non-violently."
Räpple was later ejected from the AfD and put under investigation by a public prosecutor.
A mission statement on the FaS website adds that the group is intended to oppose the "insane coercive measures in connection with the so-called corona pandemic.”
“Today we know that it is a United Nations plan to establish a New World Order," it says.
"With all their might and force the mighty of this world are executing this plan that has been developed over decades.
“Let us make it clear to these traitors that we are [ready] to defend ourselves with all means.”
In the UK, health secretary Matt Hancock has today slammed over 300 NHS workers and care home staff who joined an anti-vaxxer group on Facebook.
Posts to the group voiced opposition to face masks and likened the Pfizer jab to "poison".
https://www.the-sun.com/news/1808771/far-right-anti-vaxxers-pfizer-corona-violence/
I'd like to call attention to this statement.
Speaking to VICE World News, Lissi Pfeiffer of DEMOS e.V., a non-profit body that monitors extremism, said that FaS was formed by Mario Buchner and Torsten Frank, both previously members of the AfD.
She said that Buchner was part of a network on the extreme right of German politics that hopes to "destabilise and overthrow" the government so it can be replaced by a "totalitarian and racist one.”
EVERYTHING people are opposing is getting called RACIST!
People of color better start helping us stand up to this! I don't want the fucking vaccine either! If these corona vaccines are harmful do POC want to be held responsible because they didn't help us fight this? Come on! POC start making public statements on social media! Say people fighting the vaccine isn't racism!
Posted by JE Aggas at 9:20 AM