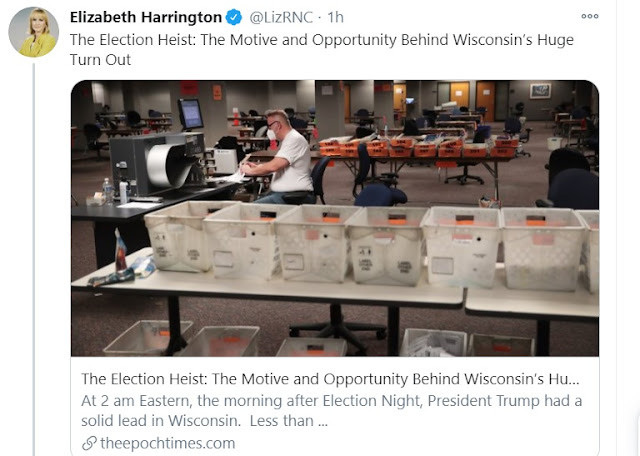 Wis. Election Changes Put Ballots Into Question
According to reports on Sunday, supervisors made three substantial changes to the ballots.
This included allowing local county election clerks to fill in missing addresses, exempting 200,000 citizens from voter ID rules due to the pandemic, and failing to purge 130,000 names from outdated voter rolls.
The changes could open the door for the courts to intervene on behalf of President Trump.
https://www.theepochtimes.com/the-election-heist-the-motive-and-opportunity-behind-wisconsins-huge-turn-out_3567322.html

Wisconsin’s attorney general dismissed claims of voting irregularities late last week however, the Speaker of the House has called for an investigation into concerns of voter fraud.
The Joe Biden campaign’s Texas Political Director has been formally accused of helping to run an illegal ballot harvesting operation, according to two separate affidavits filed Monday at the Texas Supreme Court.
https://nationalfile.com/bidens-texas-political-director-accused-of-illegal-ballot-harvesting-at-texas-supreme-court/
We the People choose our government by consent of the governed. We need to ensure that our elections are fair, honest, and transparent.
Al Gore got his day in court. President Trump and the 70 million Americans who voted for him should be afforded the same opportunity.
https://twitter.com/govkristinoem/status/1325462901407289344?s=20
Posted by JE Aggas at 9:58 AM