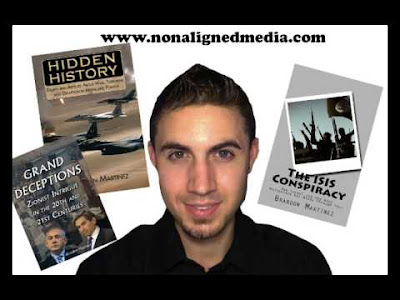 
Brandon Martinez is an independent writer and journalist from Canada who specializes in foreign policy issues, international affairs and 20th and 21st century history. For years he has written on Zionism, Israel-Palestine, American and Canadian foreign policy, war, terrorism and deception in media and politics. He is the author of “Grand Deceptions, Hidden History and The ISIS Conspiracy.”

In the first hour, Brandon outlines some of the new content that will be included in the forthcoming second edition of “Grand Deceptions.” The book covers the Zionist origins of the “War on Terror” beginning with 9/11 and the strategies that have been used in Syria, Libya, Iraq and Afghanistan throughout the entire Neocon conspiracy to create a clash of civilizations in the Middle East. Brandon details how the migrant crisis in Europe is part of a Zionist plot to weaken the West and break down the countries surrounding Israel in their quest for expansion. We look at the Jewish elite’s tactic of creating a divide in the consensus over the multicultural experiment, along with promoting activism aimed at exacerbating divisions through identity politics. Brandon goes into the history of Cultural Marxism and the Zionist Frankfurt School agenda to break down Western society. He also explains how Muslims are being used as willing pawns in the psychological war against Whites that is designed to produce a disillusionment of ethnic homogeneity so as to further the long-term Coudenhove-Kalergi goal of creating a “Eurasian-Negroid” mongrel globalist slave race. Then, we discuss how legitimate Nationalist movements concerned with the Islamic diaspora are being hijacked by Zionist Neocon agents like Pegida UK who are openly supporting Israel, creating a schizophrenic reaction to the issue of forced multiculturalism.

In the members’ hour, we address the problems we face in bringing awareness to the general populace of the Zionist scheme against Whites while promoting self-determination for all peoples on Earth. Brandon says that we must take a moralistic approach to opposing the agenda to destroy Europe and avoid emanating the holier-than-thou attitudes of the evil elites we oppose. We get into the issue of Jewish supremacy and the fact that Islamization of the West is looked at as punishment for the Christian persecution of Jews 100s of years ago, and the holocaust can be invoked at any time to silence any “anti-Semitism” coming from “gentiles.” We also discuss the myth of the 6 million that has been part of an ages-old religious narrative of a Jewish messiah’s return to Earth. Further, we emphasize how the cultural disruption in Europe resulting from mass immigration serves as a smoke screen for more purging of Syrians and other Middle Easterners in Israel’s psychopathic push to expand territory and control more oil and water resources. Later, our focus turns to the tremendous task it is to power forth and continue the quest of exposing the root cause of our world’s decaying condition.